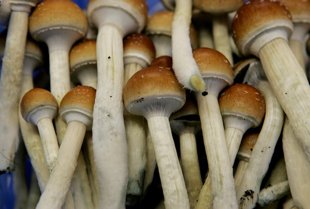 The hallucinogen in magic mushrooms may no longer just be for hippies seeking a trippy high.

Researchers at Johns Hopkins University School of Medicine have been studying the effects of psilocybin, a chemical found in some psychedelic mushrooms, that’s credited with inducing transcendental states. Now, they say, they’ve zeroed in on the perfect dosage level to produce transformative mystical and spiritual experiences that offer long-lasting life-changing benefits, while carrying little risk of negative reactions.

The breakthrough could speed the day when doctors use psilocybin–long viewed skeptically for its association with 1960s countercultural thrill-seekers–for a range of valuable clinical functions, like easing the anxiety of terminally ill patients, treating depression and post-traumatic stress disorder, and helping smokers quit. Already, studies in which depressed cancer patients were given the drug have reported positive results. “I’m not afraid to die anymore” one participant told The Lookout.

The Johns Hopkins study–whose results will be published this week in the journal Psychopharmacology–involved giving healthy volunteers varying doses of psilocybin in a controlled and supportive setting, over four separate sessions. Looking back more than a year later, 94 percent of participants rated it as one of the top five most spiritually significant experiences of their lifetimes.

More important, 89 percent reported lasting, positive changes in their behavior–better relationships with others, for instance, or increased care for their own mental and physical well-being. Those assessments were corroborated by family members and others.

“I think my heart is more open to all interactions with other people,” one volunteer reported in a questionnaire given to participants 14-months after their session.

“I feel that I relate better in my marriage,” wrote another. “There is more empathy — a greater understanding of people, and understanding their difficulties, and less judgment.”

Identifying the exact right dosage for hallucinogenic drugs is crucial, Roland Griffiths, a professor of psychiatry at Johns Hopkins who led the study, explained to The Lookout. That’s because a “bad trip” can trigger hazardous, self-destructive behavior, but low doses don’t produce the kind of transformative experiences that can offer long-term benefits. By trying a range of doses, Griffiths said, researchers were able to find the sweet spot, “where a high or intermediate dose can produce, fairly reliably, these mystical experiences, with very low probability of a significant fear reaction.”

In the 1950s and ’60s, scientists became interested in the potential effects of hallucinogens like psilocybin, mescaline, and lysergic acid diethylamide (LSD) on both healthy and terminally ill people. Mexican Indians had, since ancient times, used psychedelic mushrooms with similar chemical structures to achieve intense spiritual experiences. But by the mid ’60s, counterculture gurus like Dr. Timothy Leary and Aldous Huxley were talking up mind-altering drugs as a way of expanding one’s consciousness and rejecting mainstream society. Stories, perhaps apocryphal, circulated about people jumping out of windows while on LSD, and some heavy users were said to have suffered permanent psychological damage. By the early ’70s, the US government had essentially banned all hallucinogenic drugs.

But recent years have seen the beginning of a revival of mainstream scientific interest in mind-altering drugs, and particularly in the possibility of using them in a clinical setting to alleviate depression and anxiety. A 2004 study by the government of Holland (pdf) found psilocybin to have no significant negative effects.

Here in the United States, too, the climate may be shifting. In a statement accompanying the announcement of the Johns Hopkins findings, Jerome Jaffe, a former White House drug czar now at the University of Maryland School of Medicine, said the results raise the question of whether psilocybin could prove useful “in dealing with the psychological distress experienced by some terminal patients?”

The hope is that the long-lasting spiritual and transcendental experiences associated with psilocybin could–if conducted in a controlled and supportive setting, and with appropriate dosage levels–help ease patients’ fear and anxiety, allowing them to approach death with a greater sense of calm. (You can see one terminally ill cancer patient speak movingly about the positive effects of psilocybin here.)

Griffiths thinks the drug may have the potential to alleviate the suffering of terminal patients. He’s currently leading a separate Johns Hopkins psilocybin study, using volunteers who are depressed after being diagnosed with cancer. “So far we’ve had–anecdotally only–very positive results,” comparable to the study with healthy volunteers, he said. A study from the University of California, Los Angeles last year reported similar positive results.

But Griffiths said his study, under way for three years, has only recruited 20 patients, in part because oncologists are more interested in curing cancer than helping patients cope with its effects, so they don’t refer provide many referrals. “Most oncologists just don’t get it,” he said. “It’s not the focus of their research, and they’re busy people.”

But the experience of one volunteer in Griffiths’s study offers a glimpse of the potential benefits. Lauri Reamer, 47, told The Lookout that she participated in two Johns Hopkins psilocybin sessions last September, not long after ending intensive chemotherapy and radiation to treat a rare form of leukemia that, several times in the preceding few years, had almost taken her life.

Reamer, an anesthesiologist from Ruxton, Md., with three young daughters, said that although her disease was in remission by that time, she was still suffering psychologically from the trauma of the illness and the treatment. She had walled herself off emotionally, she said, and was unable to show empathy for others or even for herself.

The psilocybin had an immediate impact. “At the end of the session, I was just in this joyous, happy, relaxed state,” she said. “The drug was gone–what was left was just this peaceful calm.”

That calm had lasting benefits. Reamer said the experience–what she called “an epiphany”–gave her the impetus to get out of a failing marriage. Since doing so, she said, both she and her daughters have been much happier.

That’s not the only improvement. “My sleeping has gotten better. My relationships have gotten better with people,” she said. “The fog has lifted.”

“The best thing it did for me was heal me psychologically and emotionally and allow me to be back in my kids’ lives, be back to being a mother,” Reamer concluded. As she spoke, she was taking her daughters–two 15-year old twins, and a 6-year-old–on a trip to Hershey Park.

And although doctors tell her that, thanks to the effect of the illness and the treatment, she likely has only 10 or 15 years to live, she’s able to approach that challenge with equanimity.

“My fear of death kind of disappeared,” she said. “I’m not afraid to die anymore.”

Griffiths, of Johns Hopkins, said Reamer’s experience isn’t an outlier among the volunteers, both sick and healthy, who have tried psilocybin. “People feel uplifted, and very often have a sense that everything is O.K. at one level,” he said. “That there’s sense to be made out of the chaos.”

“When you see people undergoing that kind of transformation,” he added, “it’s really quite moving.”