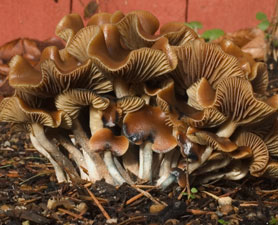 THE GIST
After a psychedelic trip on magic mushrooms, people often describe the experience as mind-expanding, consciousness altering, emotionally insightful and even spiritually transcendent. Now, scientists have peered into the brains of people tripping on psilocybin — the active ingredient in mushrooms — and their results revealed a few surprises.

PHOTOS: The Magic Mushrooms in My Yard

The drug also decreases activity in something called the default mode network, which is believed to be involved in maintaining a balanced sense of consciousness and ego through self-reflection, though scientists still don’t entirely understand the network or agree about what it does.

The more these brain areas were suppressed, the researchers report today in Proceedings of the National Academy of Sciences, the more intense people reported their changes in perception to be.

Besides helping explain how magic mushrooms induce hallucinogenic adventures of the mind, the results suggest that, in controlled settings, psilocybin might be a useful tool for treating depression and other psychiatric problems.

“One of the parts of the brain that is markedly switched off [with psilocybin] is the anterior cingulate cortex, which is particularly overactive in people with depression,” said David Nutt, professor of neuropsychopharmacology at Imperial College, London. Some researchers “put electrodes in that part of the brain to switch it off. It would be a lot simpler and safer to use psilocybin instead of electrodes.”

In British author Aldous Huxley’s ruminations on the effects of mescaline, a psychedelic compound that occurs naturally in the Peyote cactus, he expressed the sense that the hallucinogenic drug removed natural constraints that keep the brain focused on the inputs and tasks necessary for normal functioning. By removing those constraints, Huxley speculated, hallucinogenic drugs create an otherworldly sense of reality and a mystical state of transcendence and transformation.

From subjective descriptions like those, scientists have long assumed that hallucinogens, like mescaline and psilocybin, work in the brain by increasing blood flow and creating new kinds of connections. Research on psychedelic effects in the brain, however, has been limited and hard to get approval for.

For the new study, Nutt and colleagues recruited 15 healthy people with previous experience taking hallucinogenic substances. Over two days, the researchers monitored activity in participants’ brains as they lay in a scanner for up to an hour. On the first day, participants received an intravenous shot of a placebo solution. The next day, they got a shot of psilocybin that was dosed to peak after about four minutes and was mostly over after about 30 minutes.

No one had trouble figuring out which shot contained the real drug. Afterwards, they talked at length about their experiences.

All of the participants described kaleidoscopic vision with images of bright and angular shapes, Nutt said. The rush of the first 10 to 30 seconds induced some fear, he added, but positive feelings then immediately swept over them. Many participants said that the benefits of the experience were profound and that they felt they had moved on from where they had been. Others said the experience was interesting, though not necessarily life-changing. None described the trip as negative.

“They mostly got the sense that they were going somewhere else, that they were being transmuted into space and being fragmented or stretched,” Nutt said. “One guy found himself kneeling at the feet of God. Some described being at one with the universe.”

In brain scans, the researchers saw a decrease in both blood flow and metabolism in several key areas after injection with the drug, including the anterior cingulate cortex, the medial prefrontal cortex and the posterior cingulate cortex. Also reduced was connectivity and communication between some of these areas.

The findings offer some potentially exciting opportunities to use psilocybin in therapeutic settings, said Roland Griffiths, a neuroscientist and pscyhopharmacologist at Johns Hopkins University in Baltimore.

His research has shown some long-lasting cognitive benefits of psilocybin, with study subjects reporting that they feel happier, calmer and more at peace more than a year after taking a carefully measured dose of the drug in an experimental setting. He is currently conducting a trial with cancer patients who are anxious or depressed.

Nutt plans next to see if the hallucinogen, combined with therapy, might be able to help calm hyperactive brain regions in people with enduring depression who are locked into obsessively negative mindsets.

There is reason to believe it might work. In another study, also published today in The British Journal of Psychiatry, Nutt and colleagues report that guiding people to think positively about events in their past while they were under the influence of psilocybin led to a greater sense of well-being two weeks later.

While the research offers tantalizing evidence that psilocybin can be safe and helpful in clinical settings, Griffiths said, the hallucinogen still carries risks when people take it on their own. Depending on the dose and the situation, the drug can lead to panic and cause people to harm themselves or others.

“From a cultural point of view, there may be some applications that are useful and therapeutic,” Griffiths said. “But I’m not sure we’re ever going to be able to go to the drug store, pick it up and bring it home.”