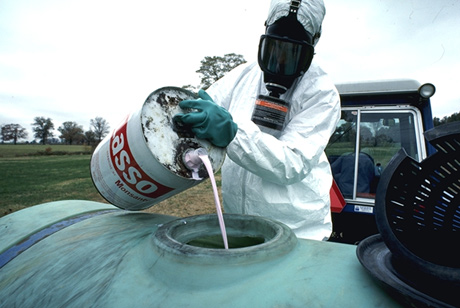 A French farmer who can no longer perform his routine farming duties because of permanent pesticide injuries has had his day in court, literally, and the perpetrator of his injuries found guilty of chemical poisoning. The French court in Lyon ruled that Monsanto’s Lasso weedkiller formula, which contains the active ingredient alachlor, caused Paul Francois to develop lifelong neurological damage that manifests as persistent memory loss, headaches, and stuttering during speech.

Reports indicate that the 47-year-old farmer sued Monsanto back in 2004 after inhaling the Lasso product while cleaning his sprayer tank equipment. Not long after, Francois began experiencing lasting symptoms that prevented him from working, which he says were directly linked to exposure to the chemical. Since Lasso’s packaging did not bear adequate warnings about the dangers of exposure, Francois alleged at the time that Monsanto was essentially negligent in providing adequate protection for its customers.

To the surprise of many, the French court agreed with the claims and evidence presented before it, declaring earlier this year that “Monsanto is responsible for Paul Francois’ suffering after he inhaled the Lasso product … and must entirely compensate him.” The court is said to be seeking expert opinion on how to gauge Francois’ losses in order to determine precisely how much Monsanto will be required to compensate him in the case.

“It is a historic decision in so far as it is the first time that a (pesticide) maker is found guilty of such a poisoning,” said Francois Lafforgue, Paul Francois’ lawyer, to Reuters earlier in the year.

According to the U.S. Environmental Protection Agency (EPA), exposure to alachlor can cause damage to the liver, kidneys, spleen, and eyes, and may lead to the development of anemia and even cancer. The EPA apparently views alachlor as so dangerous, in fact, that the agency has set the maximum contaminant level goals (MCLG) for alachlor to zero in order to “prevent potential health problems.” (http://water.epa.gov/drink/contaminants/basicinformation/alachlor.cfm)

In 2007, France officially banned Lasso from use in the country in accordance with a European Union (EU) directive enacted in 2006 prohibiting the chemical from further use on crops in any member countries. But despite all the evidence proving that alachlor can disrupt hormonal balance, induce reproductive or developmental problems, and cause cancer, the chemical is still being used on conventional crops throughout the U.S. to this very day. (http://www.pesticideinfo.org/Detail_ChemReg.jsp?Rec_Id=PC35160)

“I am alive today, but part of the farming population is going to be sacrificed and is going to die because of (alachlor),” added Francois to Reuters.