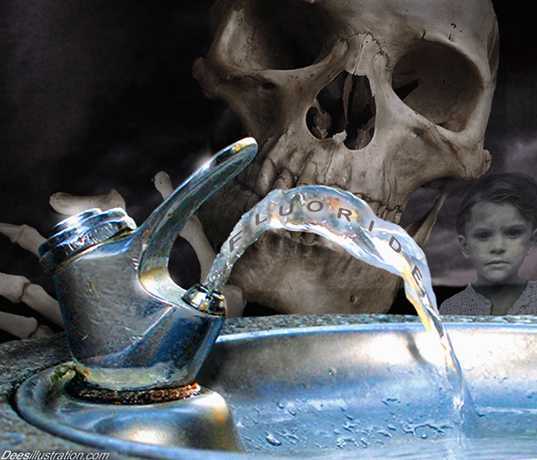 The average American today is exposed to a whole lot more fluoride than he or she is probably aware. Conventional produce, it turns out, is one of the most prevalent sources of fluoride exposure besides fluoridated water, as conventional crops are not only irrigated with fluoride-laced water in many cases, but also sprayed with pesticide and herbicide chemicals that have been blended with fluoride, and later processed once again with fluoridated water.

This fact may come as a surprise to many who have bought into the idea that eating more fresh produce is automatically beneficial for health, regardless of how that produce was grown. Thinking that they are doing their bodies a favor, millions of Americans have incorporated conventional fruits and vegetables into their everyday diets, not realizing that the resulting cumulative effect of fluoride exposure from these foods could be harming their health.

According to the U.S. Centers for Disease Control and Prevention (CDC), nearly 75 percent of the U.S. population is being forcibly medicated with fluoride chemicals via their water supplies. This means that a significant percentage of U.S. crops are also irrigated using this same fluoridated water, particularly in the “Bread Belt” states, many of which are almost entirely fluoridated. (http://www.cdc.gov/fluoridation/statistics/2010stats.htm)

While not all crops uptake fluoride from water in the same amounts, many absorb significant amounts of fluoride through their root systems every time they are watered. Tea plants, for instance, are among the worst when it comes to absorbing fluoride from soil and water, and storing it in their leaves (http://lpi.oregonstate.edu/infocenter/phytochemicals/tea/). Grapes are another crop that tends to accumulate fluoride in high levels as well.

According to data collected by the U.S. Department of Agriculture (USDA) for its National Fluoride Database of Selected Beverages and Foods, fresh fruits and vegetables have relatively low levels of fluoride compared to what is found in fluoridated water, reconstituted juices, dried fruit, and other sources (http://www.fluoridealert.org/content/fresh_foods/). But levels can vary, and particularly in the case of conventional produce, fluoridated pesticides and herbicides can add to overall fluoride exposure and intake levels.

Because of its extreme toxicity, fluoride is often added to pesticides and herbicides in order to protect conventional crops from insect damage and disease. But just like with fluoridated irrigation water, fluoridated crop chemicals often absorb directly into plants, or at the very least, linger on the skins of the fruits and vegetables they produce, which adds to their fluoride toxicity.

Sulfuryl fluoride is one such pesticide that is commonly used to treat conventional cereal grains, dried fruit, tree nuts, cocoa beans, coffee beans, and other foods. Though the U.S. Environmental Protection Agency (EPA) is said to currently be in the process of phasing out the use of sulfuryl fluoride (http://www.ewg.org/release/epa-bar-fluoride-based-pesticide), the chemical is still being used on a wide variety of conventional food crops, unbeknownst to consumers.

There are, in fact, more than 150 different fluoridated pesticides currently approved for use on conventional crops, none of which are typically indicated on produce labels. Chances are that if you eat conventional fruit, vegetables, or nuts, you are more than likely eating varieties that have been sprayed or fumigated with fluoride chemicals, which are prohibited from use on organic crops.

As we reported on recently, conventional grapes are often sprayed with the fluoride-based chemical pesticide cryolite, which is often sold under the trade name Kryocide. This particular pesticide actually contains substances that facilitate the passing of fluoride across the blood-brain barrier and directly into brain tissue, which makes it exceptionally toxic. (http://www.naturalnews.com/036753_fluoride_pesticides_grapes.html)

The Fluoride Action Network (FAN) has also created a helpful guide entitled 7 Ways to Avoid Fluoride in Beverages and Food that will help you discern how best to avoid fluoride when shopping for other types of food: http://www.fluoridealert.org/content/grocery_guide/