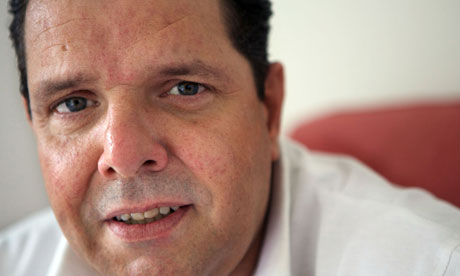 Death of Sean Hoare – who was first named journalist to allege Andy Coulson knew of hacking – not being treated as suspicious.

Hoare first made his claims in a New York Times investigation into the phone-hacking allegations at the News of the World. Photograph: Hazel Thompson/Eyevine

Sean Hoare, the former News of the World showbusiness reporter who was the first named journalist to allege that Andy Coulson was aware of phone hacking by his staff, has been found dead .

Hoare, who worked on the Sun and the News of the World with Coulson before being dismissed for drink and drugs problems, was said to have been found at his Watford home.

Hertfordshire police would not confirm his identity, but said in a statement: “At 10.40am today [Monday 18 July] police were called to Langley Road, Watford, following the concerns for the welfare of a man who lives at an address on the street. Upon police and ambulance arrival at a property, the body of a man was found. The man was pronounced dead at the scene shortly after.

“The death is currently being treated as unexplained but not thought to be suspicious. Police investigations into this incident are ongoing.”

There was an unexplained delay in the arrival of forensics officers at the scene.

Neighbours said three police cars and two ambulances arrived at the property shortly before 11am. They left around four hours later, around 3pm, shortly after a man and a woman, believed to be grieving relatives, arrived at the premises. There was no police presence at the scene at all for several hours.

The curtains were drawn at the first-floor apartment in a new-build block of flats.

At about 9.15pm, three hours after the Guardian revealed Hoare had been found dead a police van marked “Scientific Services Unit” pulled up at the address, where a police car was already parked. Two officers emerged carrying evidence bags, clipboards, torches and laptop-style bags and entered the building. Three officers carrying cameras and wearing white forensic suits went into the flat at around 9.30pm.

Hoare was in his mid-40s. He first made his claims in a New York Times investigation into the phone-hacking allegations at the News of the World. He told the newspaper that not only did Coulson know of the hacking, but he also actively encouraged his staff to intercept the calls of celebrities in the pursuit of exclusives.

In a subsequent interview with the BBC he alleged he was personally asked by his editor at the time, Coulson, to tap into phones. In an interview with the PM programme he said Coulson’s insistence he did not know of the practice was “a lie, it is simply a lie”. At the time a Downing Street spokeswoman said Coulson totally and utterly denied the allegations; he had “never condoned the use of phone hacking and nor do I have any recollection of incidences where hacking took place”.

Hoare said he was once a close friend of Coulson’s, and told the New York Times the two first worked together at the Sun, where, Hoare said, he played recordings of hacked messages for Coulson. At the News of the World, Hoare said, he continued to inform Coulson of his activities. He “actively encouraged me to do it”, Hoare said. In September last year he was interviewed under caution by police over his claim the former Tory communications chief asked him to hack into phones when editor of the paper, but declined to make any comment.

Hoare returned to the spotlight last week, after he told the New York Times that reporters at the NoW were able to use police technology to locate people using their mobile phone signals, in exchange for payments to police officers. He said journalists were able to use “pinging”, which measured the distance between a mobile handset and a number of phone masts to pinpoint its location.

Hoare gave further details about “pinging” to the Guardian last week. He described how reporters would ask a news desk executive to obtain the location of a target: “Within 15 to 30 minutes someone on the news desk would come back and say ‘Right, that’s where they are.'”

He said: “You’d just go to the news desk and they’d come back to you. You don’t ask any questions. You’d consider it a job done.

“The chain of command is one of absolute discipline, and that’s why I never bought into it, like with Andy saying he wasn’t aware of it and all that. That’s bollocks.”

He said he stood by everything he told the New York Times of “pinging”. “I don’t know how often it happened. That would be wrong of me. But if I had access, as a humble reporter … ”

He admitted he had had problems with drink and drugs, and had been in rehab. “But that’s irrelevant,” he said. “There’s more to come. This is not going to go away.”

Hoare named a private investigator who he said had links with the News of the World, adding: “He may want to talk now, because I think what you’ll find now is a lot of people are going to want to cover their arse.” Speaking to another Guardian journalist last week, Hoare repeatedly expressed the hope that the hacking scandal would lead to journalism in general being cleaned up, and said he had decided to blow the whistle on the activities of some of his former NoW colleagues with that aim in mind.

He also said he had been injured the previous weekend while taking down a marquee erected for a children’s party. He said he broke his nose and badly injured his foot when a relative accidentally struck him with a pole from the marquee. Hoare also emphasised that he was not making any money from telling his story.

Having been treated for drug and alcohol problems, Hoare reminisced about his partying with former pop stars and said that he missed the days when he was able to go out on the town.

On Monday evening the curtains were drawn at his home, a first-floor apartment in a new-build block of flats.

A neighbour living opposite, Nicky Dormer, said three police cars and two ambulances arrived at the property at 11am; police left at 3pm, shortly after a man and a woman, believed to be grieving relatives, arrived at the premises.

She and another neighbour described Hoare as a jovial man who would often sit on his balcony, overlooking the block entrance, and talk to residents. They said he lived in the block with his partner, a woman called Jo, who they believed had been away on holiday. Neither had seen Hoare for a few days.

Paul Pritchard, 30, another neighbour, said Sean Hoare was “the most sociable” resident, and they would regularly see him watering the communal front lawn.

“It is just such a shock. About a month ago he said he felt unwell and he said he went to the doctors for a checkup. Then I saw him again and he seemed well.”