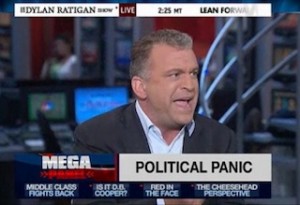 Dylan Ratigan is mad as hell and he isn’t going to take it anymore. While hosting a discussion on the seemingly endemic problems that the U.S. political process is enduring — specifically how it relates to responsibly fiscal policy — the MSNBC host blew a gasket over what he sees as the real mathematical problem at play. The impassioned diatribe was delivered in the context of the recent credit downgrade and market volatility, and Ratigan placed equal blame on both Republicans and Democrats, but mostly argued about the entire integrated system, which included banking, trade and taxation.

It’s a rare moment to see a cable news host speak so passionately, and this is about as entertainingly unhinged as you will ever want to see. While I encourage you to watch the entire clip, the essence of his message can best be explained in this particular part (transcript via):

We’ve got a real problem…this is a mathematical fact. Tens of trillions of dollars are being extracted from the United States of America. Democrats aren’t doing it, Republicans aren’t doing it, an entire integrated system, banking, trade and taxation, created by both parties over a period of two decades is at work on our entire country right now.

At one point Ratigan became self-aware enough to recognize that he’d lost his temper, before explaining the source of his frustration by saying “I’ve been coming on TV for three years doing this, and the fact of the matter is, that there’s a refusal on both the Democratic and the Republican side of the aisle to acknowledge the mathematical problem.”