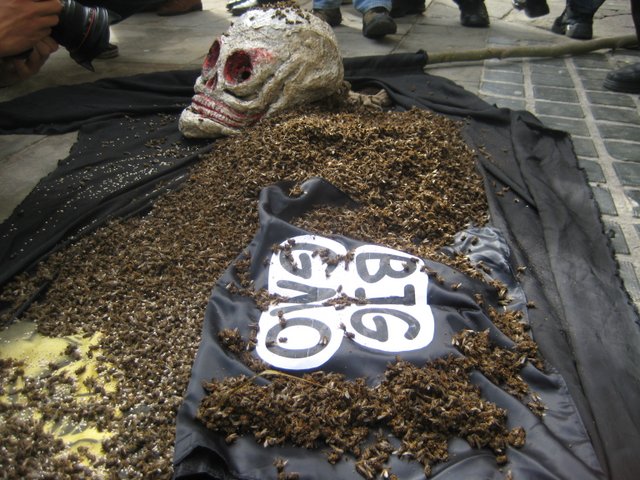 On March 15, over 1,500 beekeepers and anti-GMO protesters marched through the streets of Warsaw, depositing thousands of dead bees on the steps of the Ministry of Agriculture in protest of genetically modified foods and their pesticides which are together largely responsible for the killing off of bees, butterflies, moths and other beneficial pollinators in great numbers.

Later that day the Minister of Agriculture, Marek Sawicki, announced plans to ban MON810, which has already produced millions of hectares of pesticide resistant “superweeds” in the US.

The Polish Beekeepers Association organized the protest, joining forces with International Coalition to Protect the Polish Countryside (ICPPC) and the Coalition for a GMO Free Poland.  Targeting Monsanto’s MON810 GM corn in particular, they also called for a complete ban on all genetically engineered crops as well as the pesticides found to be most damaging to the environment (and particularly to bees).

In 2008, the Polish Parliament banned GM feed, including both the planting and importing of GM crops. “Despite this progressive step,” reports Food Travels, “the European Commission has refused to accept regional bans on GMOs, keeping Polish farmers, producers, and activists on the offensive.”

Regardless, says the ICPPC, “None of the nine European Union countries that have already prohibited MON 810 did so by asking the permission of the EU.”

There was a great variety of attire as beekeepers dressed in their work bee suits and masks and ran their hive smoke guns as they marched, many wore yellow jackets with the famous Einstein quote, and many more original signs, props, and costumes.  Go here for more photos.

The ICPPC is asking Polish residents to write Minister of Agriculture Marek Sawicki, demanding that he implement an immediate moratorium on GM crops, without waiting for EU approval.

Why I Left Google