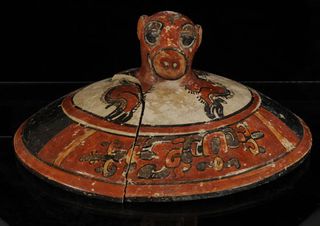 One of the oldest Maya tombs ever found has been uncovered in western Guatemala, say archaeologists.

Located at a temple site in Retalhuleu province, the grave is thought to be that of an ancient ruler or religious leader who lived some 2,000 years ago.

Carbon-dating indicated the tomb had been built between 700 and 400 BC, said government archaeologist Miguel Orrego.

A rich array of jade jewels, including a necklace depicting a vulture-headed human figure, were found.

The scientists found no bones at the tomb in the Tak’alik Ab’aj site – some 180km (110 miles) south of Guatemala City – probably because they had disintegrated.

But the vulture-headed figure appears to identify the tomb’s occupant as an ajaw – or ruler – because the symbol represented power and economic status and was given to respected elder men.
Big chief

“He was a big chief”, said Mr Orrego. “He bridged the gap between the Olmec and Mayan cultures in central America.”

The leader may have been the first to introduce elements which later became characteristic of the Maya culture, such as the building of pyramids and the carving of sculptures depicting the royal families, Reuters news agency cited historians as saying.

The Olmec empire began to fade at around 400 BC, while the Maya civilisation was starting to grow and develop, said Christa Schieber, another archaeologist working at the site.

The Mayas went on to rule much of Central America from 250 to 800 AD; their empire extended from modern-day Honduras to central Mexico.