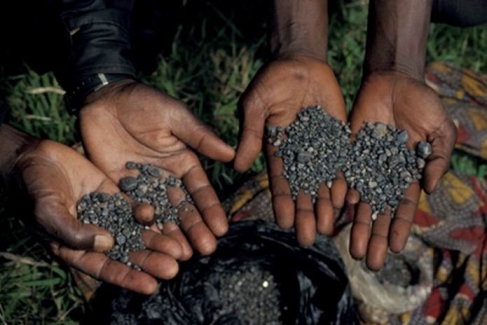 Coltan: What You Should Know

What is Coltan?
Coltan is short for Columbite-tantalite – a black tar-like mineral found in major quantities in the Congo.. The Congo possesses 80 percent of the world’s coltan. When coltan is refined it becomes a heat resistant powder that can hold a high electric charge. The properties of refined coltan is a vital element in creating devices that store energy or capacitors, which are used in a vast array of small electronic devices, especially in mobile phones, laptop computers, pagers, and other electronic devices.

The United Nations notes in its 2001 report on the Illegal Exploitation of Natural Resources in the congo that “The consequences of illegal exploitation has been twofold: (a)massive availability of financial resources for the Rwandan Patriotic Army, and the individual enrichment of top Ugandan military commanders and civilians; (b) the emergence of of illegal networks headed by either top military officers or businessmen.”

Foreign Corporate exploitation
Although the countries mentioned above directly exploit coltan, foreign multi-national corporations have been deeply involved in the exploitation of coltan in the Congo. The coltan mined by rebels and foreign forces is sold to foreign corporations. Although, the United Nations in its reports on the Congo do not directly blame the multi-national corporations for the conflict in the Congo, the United Nations does say that these companies serve as “the engine of the conflict in the DRC.”

Corporations from other countries have been a part of the coltan exploitation chain. These companies include but are not limited to Germany’s HC Starc and EPCOS, China’s Nigncxia, and Belgium’s George Forrest International.

Once the coltan is processed and converted to capacitors, it is then sold to companies such as Nokia, Motorola, Compaq, Alcatel, Dell, Hewlett-Packard , IBM, Lucent, Ericsson and Sony for use in a wide assortment of everyday products ranging from cell phones to computer chips and game consoles.

The components controlling the flow of electricity in mobile phones are composed of the refined mineral known as Coltan. With more and more people using mobile phones the demand for Coltan has increased significantly.

The United Nations reports child labour in Africa has significantly increased in Coltan mines. In some regions of the Congo, about 30 percent of schoolchildren are now forced to work in the mines.

It can be dangerous to ask questions

“The control over these resources works through maintaining local militia and exploiting cheap labour to excavate the mines”, says Antony Grange, Country Coordinator with experience from the DanChurchAid work in DRC Congo. “Attempting to oppose these practices locally is very risky business, as DanChurchaid’s former partner “Héritiers de la Justice” knows all too well since they have experienced several assassination of their staff members in the recent years. Only international pressure may stop this development,” says Antony Grange.

When Denmark become a member of the UN Security Council, the Danish Government put the actions to promote peace and stability in Africa on top of the agenda, and they promised to put a focus on the role natural recourses play as a cause to many conflicts. Income from oil, diamonds and export of woods, continues to fuel armed conflicts.

A call to action

However, Denmark has not managed to convince the Security Council to strengthen the present activities. Therefore the Danish development NGOs now call on the Minister for Foreign Affairs to bring the issue to the table and to work for more efficient tools for the UN to punish those who make profit out of the conflict resources. The organisation also calls for a permanent position within the UN, with a mandate to work for prevention of conflicts financed by natural resources such as oil, woods, and minerals.