CBP’s answer to our lawsuit: Deny everything, and claim that nobody has any rights 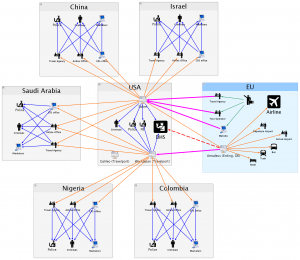 Where has your PNR data gone? (click image for larger version or here for details)

The U.S. government has filed its initial answer to our lawsuit against U.S. Customs and Border Protection (CBP) for illegally withholding records of its travel surveillance system, and an initial procedural hearing in the case has been scheduled for Thursday, January 6, 2011, at 10 a.m. in San Francisco.

But if the government’s claims are true, the implications of some of them are shocking. In particular, they claim that, “Plaintiff was provided all documents that he is entitled to by law,” even though — like everyone else who has requested their records from the “Automated Targeting System” (ATS) — we have never received anything that was even claimed to be in response to my request for the “accounting of disclosures” required by the Privacy Act. Nor did we receive anything which was even claimed to be the “risk assessments” made of me, or the rules for determining those risk assessments, both of which were mentioned in CBP’s years-belated official notice of the contents of the ATS.

In other words, the government is claiming in answer to our lawsuit that nobody — not even U.S. citizens — has any legal entitlement to know what other government agencies or third parties have received their travel records including PNR’s from CBP, what “risk” scores (used to decide whether to allow us to fly, or how to treat us) have been assigned to us, or how those scores have been generated.

So much for any pretense of transparency, accountability, or access rights. Nobody has any right to know who has gotten our PNRs, or how they are being used against us.

The initial “case management conference” will be our first chance to meet the government’s lawyers and the judge to which the case has been assigned, Judge Richard Seeborg of the U.S. District Court for the Northern District of California. We expect it to be brief, and to be solely concerned with setting a schedule for filing of preliminary motions. But it will be open to the press and the public, and you are welcome to attend.

The hearing will be on Thursday, January 6, 2011, at 10 a.m. in Courtroom 3 on the 17th floor of the Phillip Burton Federal Building and U.S. Courthouse, 450 Golden Gate Ave. (between Polk and Larkin, near Civic Center), in San Francisco.

More information including links to news reports are in our FAQ about the case.