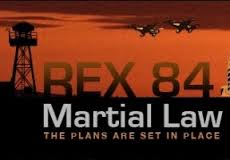 Rex 84, short for Readiness Exercise 1984, was a classified”scenario and drill” developed by the United States Federal Government to suspend the United States Constitution, declare martial law, place military commanders in charge of state and local governments, and detain large numbers of American citizens who are deemed to be “national security threats”, in the event that the President declares a “State of National Emergency”. The plan states, events causing such a declaration would be widespread U.S. opposition to a U.S. military invasion abroad, such as if the United States were to directly invade Central America. To combat what the government perceived as “subversive activities”, the plan also authorized the military to direct ordered movements of civilian populations at state and regional levels.

Famous World Ideologies, as explained by references to Cows