Rumsfeld Documentary Reveals What an Unaccountable Slippery Bastard He Is 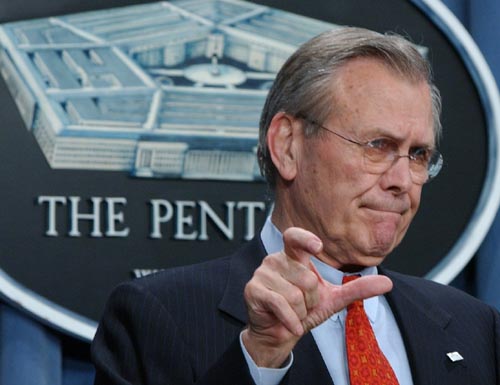 So what do we know now that we didn’t after documentarian Errol Morris’s 100-minute Q&A with Donald “I Don’t Do Quagmires” Rumsfeld in  “The Unknown Known”? Only that the former U.S. secretary of defense is still a master strategist of evasion, contradiction, misdirection and malapropism.

As a footnote, here’s what we do know to date about that dirty little Iraq War that “Rummy,” the George W. Bush White House and their nincompoop Pentagon neo-cons cooked up and spoon fed to the omnivorous American public: more than 4400 U.S. military deaths and 32,000 wounded, at least 100,000 to as many as 500,000 Iraqi fatalities, millions more displaced, and an estimated price tag of $3 trillion, give or take a few hundred billion.

Yet like most of the questions that Morris tosses—gently—at his subject, any such factual horrors are sidestepped, parried and danced around by a fitfully nimble Rumsfeld. Relaxed, nattily dressed and imperiously self-assured as ever, Morris’ hollow yet overstuffed man does his imitation of “Hogan’s Heroes” Sgt. Schultz (“I know nothing, nothing”) while implausibly denying personal culpability for any stink that blew back from the Iraq War, whether the phony Weapons of Mass Destruction raison d’être, prisoner torture or the fictitious links between Saddam Hussein and the 9/11 World Trade Center attacks.

In his Oscar-winning “The Fog of War,” Morris at least got Lyndon Johnson-era Defense Secretary Robert McNamara to shoulder some of blame for the Vietnam War quagmire. But Rumsfeld is impishly unapologetic, even as his own words are shot down by Morris’ juxtapositions with TV news footage culled from the run-up and catastrophic letdown to the 2003 Iraq invasion and subsequent U.S. occupation. Yet it’s clear that Morris’ mission isn’t to catch his subject in a Captain Queeg-style meltdown that would cause Rummy to shout “Good gracious” or “Henny-penny” and storm off the set.

Rather, Morris is chiefly interested in the infernal meta-narrative of how those in the pinnacles of power can delude themselves for so long and so often that—perhaps—they don’t even know what the truth is anymore. This is a man seemingly without an ounce of introspection and one who surely sleeps well at night, confident he did all the right things, from his time as the youngest (44) secretary of defense, during the Gerald Ford presidency, to his Freddy Krueger-like return to the Pentagon as prime architect of the shock-and-awe Iraq and Afghanistan U.S.-led invasions.

Morris goes out of his way to humanize Rumsfeld, including humdrum details of his marriage while tracing his long career as Republican White House insider and go-to warhorse who trumpeted “peace through strength” and other hawkish mantras. We hear Morris’ off-camera questions, but the slippery answers are challenged only indirectly via news footage and period headlines, not by contrary interviews that would offer known arguments to Rumsfeld’s self-serving explanations.

The film’s title is a quote from one of the enormous number of official memos Rumsfeld generated over the decades. In one wacky rumination from 2004 (Subject: What You Know), he writes of the “things that you think you know that it turns out you do not.” For Morris, this is a four-star analogy for his subject, a polarizing public figure who indeed is a riddle wrapped in an enigma—and cloaked in an impenetrable armor of Orwellian double-talk. As running metaphor, Morris cuts back and forth to images of a deep blue sea, significantly more fathomable than Rumsfeld himself.

As to any possible policy misfires during his Washington tenures, Rumsfeld blithely chalks them up to the unintended consequences of war, executive decision-making and the inevitable inability for leaders like him to anticipate everything, for Pete’s sake: i.e., heck, Stuff Happens. This expedient philosophy can rationalize pretty much any horrors stretching from Abu Ghraib to Gitmo. If only Emily Littella were still on active duty, I know she’d just say, “Never mind.”

And so it goes in Rummy-speak, as Morris sends his cameras down the rabbit hole into an upside-down universe where government morality and mea culpas have no standing, yet mad tautologies like “the absence of evidence is not the evidence of absence” do. In the question of those well-known phantom WMDs, such inane statements can justify anything, including interminable wars in which bodies are still piling up, peace is not won, and mass Mideast destruction marches on.