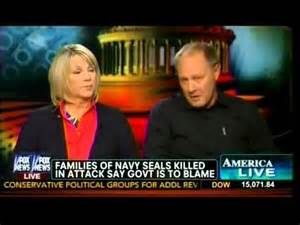 Led by firebrand Rep. Jason Chaffetz (R-Utah), Congress is to launch an official investigation into the mysterious helicopter crash that killed several members of the Navy SEAL team 6 in Afghanistan in 2011.

Back in May, the families of the SEALs went public with concerns that the Obama administration was at least partially responsible for the deaths of their sons.

The family members say that they still have not received satisfactory answers to their questions, and that there are still many inconsistencies and contradictions in the explanations they have been provided.

“We’re going to dive into this.” said Chaffetz, who is acting in his position as chairman of the House Oversight and Government Reform subcommittee on National Security.

30 Americans were killed in the crash on August 6, 2011 when insurgents shot down a U.S. military helicopter during fighting in eastern Afghanistan, making it the largest loss of life in a single incident for the U.S. military during the war. 22 of the victims belonged to the same unit as the Navy SEALS involved in the purported Osama Bin Laden operation, just three months earlier.

US military officials have maintained that none of the individuals involved directly in the Bin Laden mission were killed in the crash. However, sources have claimed that there were at least two SEALs who died on the chopper who had been involved in the Bin Laden raid.

Some of the families feel that the Obama administration’s handling of the death of Bin Laden made retaliatory attacks against SEAL Team 6 more likely. Family members have also expressed concerns that SEALS were sent into battle “without special operations aviation and proper air support.”

Chaffetz has said that he is preparing to send questions to the Pentagon and may hold congressional hearings on the issue. He noted that the families deserve answers: “That’s why you do an investigation. I want to be as factual as I can.” he said.

Larry Klayman of Freedom Watch, who is representing some of the families told reporters “This is a scandal even greater than Benghazi.”

“There we lost four valued American lives; here we sacrificed 30 American soldiers. The big question is were these brave Americans sold out by the Afghani government as payment to the Taliban for the death of bin Laden?” Klayman added.

Klayman’s questions stem from the fact that Afghani forces accompanying the Navy SEAL servicemen on the helicopter were most likely not properly vetted, meaning that they may have disclosed classified information to the Taliban about the mission, resulting in the shoot down of the helicopter.

Pentagon documents have confirmed that immediately prior to the take off of the helicopter, seven Afghan commandos who were listed on the passenger itinerary were mysteriously replaced by other Afghan military officials.

Defense officials have confirmed that all seven names of the Afghan soldiers on the passenger list did not tally with those on board when the chopper took to the air.

The families of the SEALs have noted that their sons did not have trust in Afghan soldiers, with one quoted as saying, “They are loyal to the highest bidder.”

Charlie Strange, the father of one of the killed SEALs also pointed out “There was no eye in the sky tracking [the Chinook]. Why not?”

In addition, pre-assault fire was requested by the team, but was denied by military officials on the ground.

“My son Michael died,” Strange said. “I want to know, who made these calls?”

The Pentagon probe into the shoot down denies that the incident was an “established ambush,” instead claiming that “it was a lucky shot of a low-level fighter that happened to be living [in the area]. He heard all the activity and he happened to be in the right spot.”

Families have countered those suggestions by pointing out that leading militants took to the internet in the immediate aftermath of the attack, to boast that they had successfully ambushed SEAL Team 6.

The Pentagon has also claimed that, despite recovering all the bodies of those killed, the helicopter’s black box was washed away in a flash flood.

The Pentagon told the families that all the bodies were cremated due to the fact that they were badly burned in the crash. However, pictures have emerged that show some deceased SEALs without bad burns.

“The body I saw didn’t need to be cremated,” Rep. Chaffetz said, also noting that the DoD’s explanation regarding the helicopter’s black box is “awfully odd.”

Perhaps even more controversially, family members have also provided evidence that suggests a Muslim cleric attended the funerals of the service members and disparaged them by “damning them as infidels to Allah” during an Islamic prayer.

Refusing to answer specific questions, a DoD spokesperson stated “the operational planning and execution of this mission was consistent with previous missions” and “was thoroughly investigated … we share in the grief of all of the families who lost their loved ones. The loss of 38 U.S. and Afghan military personnel was a tragic loss during a difficult campaign.”

The Way of the Drone: Emblem for an Empire of Cowards