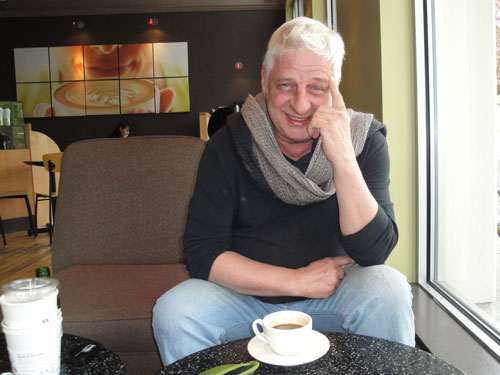 Author and lecturer Stuart Wilde is one of the real characters of the self-help, human potential movement. His style is humorous, controversial, poignant and transformational. He has written over a dozen books, including those that make up the very successful Taos Quintet, which are considered classics in their genre. They are: Affirmations, The Force, Miracles, The Quickening and The Trick to Money Is Having Some. Stuart’s books have been translated into 12 languages.

In Stuart’s Own Words – from “Affirmations”

“I was born when I was very young, in Farnham, England. Conditions at birth were very crowded. My twin sister appeared in the physical plane about twenty minutes ahead of me. I like to think that I allowed her pole position, being the proper little gent that I was, but if truth be known I was asleep in the wings and missed the curtain call.”

“My father was an officer in the British navy. At the time of my birth in 1946, he was seconded to the Foreign Office and served as a diplomat. My mother was Sicilian. They met during the Allied invasion of Sicily and were married in three weeks. She was very bright, a professor of languages and the only person that I have ever known who could speak Latin fluently.”

“At age ten, disaster struck. I was shipped from a carefree existence on the beaches of Africa to a British boarding school, a mausoleum of a place that was founded in the year dot. Its philosophies were archaic and bizarre to say the least. Much of it could be traced back to some obscure little man who sat on a sand dune in pre-history, developing ways to manipulate and harass people.”

“I remember my father standing on the tarmac of Accra airport prior to my departure for England, and ceremoniously presenting me with a five pound note ($7.50 at today’s exchange rate.) At the tender age of ten that seemed to me an untold fortune. However, once at school I discovered the sweet shop and through that, along with the ravages of inflation, I experienced my first cash flow crunch about a week-and-a-half into my scholastic career.”

“Cigarettes, it seemed, were a prized form of contraband. As ten-year-old boys were not allowed off the grounds, shortages existed. Demand having been established, I now set about the problem of supply. One morning the gods smiled on me and I met an older student whose function it was to go to the village on his bike each day to collect my master’s newspapers. I pinned him to the wall, and in my best Sicilian accent asked him if he would like to go into business. He said, ‘No.’ Whereupon I punched him in the nose and we became lifelong friends and partners.”

“I remember the tennis coach coming up to me on the last day at that school and asking me why I looked so miserable. From within my tears I mumbled, ‘the business, the business.’ Graduating from school was my first taste of unemployment.”

“I mucked around for a few years and wound up as a stage hand with the prestigious English Stage Company at Sloan Square in London. I had the idea of going into theater management. My twin sister was by now forging ahead with a showbiz career and was appearing weekly on British TV. However, once I found out that the stage manager earned just forty pounds for a seventy hour work week, the roar of the grease paint and the smell of the crowd lost its allure.”

“The swinging sixties were hotting up and the British rock bands were all the rage. On one of my travels I discovered a textile mill in Lancashire that made a kind of a T-shirt vest that miners wore. To my amazement the first boutique I offered them to snapped them up. The problem was one of logistics. I could tye-dye hundreds of T-shirts each day, but drying them was a problem. Luckily, they were greatly in demand and in my customer’s search for sartorial splendor, they failed to notice that the T-shirt hung limply off the hangers still wet.”

“By the age of twenty, I was earning a little over the equivalent of $20,000 per week…. I then signed up for a seven year course at the University of Burn-out, cruising London with a group of exotic characters whose names seemed culled from the cockney hall of fame. My chauffeurs were called Billy the Kid and Slick Vic, and I employed a fellow named Richard the Minder to get me home at night.”

“At the ripe old age of twenty eight I was exhausted. There were hardly any human experiences left to me. Literally, I had been there, done that, and gotten the T-shirt.”

“One morning, nursing a terrible hangover, I decided to discover the meaning of life. I signed up to train as a spirit medium at the College of Psychic Studies. I seemed to have a fair talent for it and not long after I was regularly contacting the spirits of the departed in hopes that they might answer my questions as to life’s wondrous mysteries.”

“During those years of searching, I struggled both spiritually and in the worldly sense. If I had known then what I know now, I could have saved myself much pain and anguish…. I continued to travel and study endlessly… Bit my bit I was able to sift the chaff from the wheat as I worked on myself, my own perceptions began to open up. I developed the ability to enter into deep states of mind and not fall asleep. After five years of training I found that I could hold concentration at the theta brain level (which is 4 – 6 cycles of brain rhythm second) almost indefinitely.

That was the turning point in my quest.”

Stuart rarely appears in public anymore, choosing instead to teach advanced metaphysics to small groups via his Transcendental Tours ™. Stuart is often described as a mystical man with a mysterious, powerful persona. Those who train with Stuart however quickly realize that at heart, Stuart is an enormously loving, generous and caring teacher, whose primary mission is to help seekers recognize their own truth. With that in mind, Stuart is destined to leave a lasting legacy for all those commited to discovering their higher purpose.

The groundbreaking new book “The Sixth Sense” is an amazing inner discovery of your SIXTH SENSE which he defines as sacred energy that taps you into the state of all-knowing. The subtle body (the etheric), Stuart reveals, is a key component in understanding the sixth sense, and he helps you to unlock its mysteries here. Once you open to the power and omniscience of the sixth sense, you can perceive life in all its subtlety and vastness.