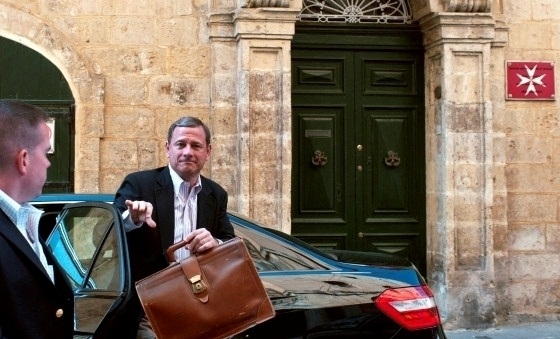 with his deciding (5-4) vote, the American judge, a devout Roman Catholic, won the immediate acclaim of his brothers in such secretive and infamous groups as the Knights of Malta and Opus Dei.

Off to the “Impregnable Fortress” in Malta

Immediately after casting his vote and writing the majority opinion on ObamaCare, John Roberts told the Washington, D.C. press corps that, to escape the furor and controversy that erupted, he was heading to an “impregnable fortress to escape.” Roberts choice of words was carefully coded with secret and embedded meaning.

That impregnable fortress, as it turns out, was to the Mediterranean island of Malta, the unofficial citadel of the papacy’s Knights of Malta. It was to Malta where, after their stunning defeat in Jerusalem, the Knights and crusaders had retreated to what they referred to as their “impregnable fortress.”

Malta and the New World Order

It was on this same geographic island location where, in 1984, President George H. W. Bush and Soviet President Mikhail Gorbachev had met on ships in the harbor and forged the “New World Order.” While the two leaders conferred on-ship, Gorby’s wife, Raisa, dressed in a symbolic, Communist red-colored dress, was taken on a pilgrimage to the Knights of Malta’s historic St. John’s Chapel, where a statue of Jesus’ mother, Mary, holds forth as the chosen icon. It sits on the exact spot where there were found ancient ruins of a great temple devoted to Goddess worship.

At Malta, U.S. Judge Roberts was met by the top potentates of the Rome-headquartered Knights of Malta, including Grand Master Matthew Festig of Great Britain. Also on hand to congratulate Justice Roberts on his monumental socialist “achievement” was Herman Van Rompuy of Belgium, a Bilderberg leader who is currently the President of the European Council.

After joking about heading to Malta to escape criticism….Chief Justice Roberts heads to Malta as it emerges that he may have written for AND against opinions on Obamacare

Chief Justice John Roberts fled the country on Tuesday opting to take up temporary residence in an ‘impregnable island fortress’.

Was it to avoid constant questioning over the Supreme Court’s controversial ruling on health care reform? To get out of the glare of Republican ire after siding with the Court’s liberal judges and deeming the law constitutional?

He waved such explanations off, saying instead that he was traveling to Malta to teach a two-week class at the Mediterranean island’s University.

His departure comes as new conspiracies are floated about his supposed flip-flopping on the health care decision, with the latest theory suggesting that he actually wrote both sides of the legal argument for the Affordable Care Act.

Last Thursday, the Chief Justice became the object of affection for many liberals as he was the deciding swing vote that gave the five-judge majority to allow the law to stand.

In the following days, numerous reports have revealed various explanations about the months-long debate among the nine judges over the legality of the bill which would effectively force all Americans to buy health insurance.

On Saturday, a CBS report cited unnamed sources as saying that the Chief Justice started off siding with his fellow Conservative judges during their private debate sessions, but then changed his opinion and went on to write the majority opinion conclusion statement for the liberal approval of the law.

That report said that the four conservatives, who were then left in the lurch as the minority, went on to write their opinion as a joint effort.

Such a move is extremely rare in the history of the Supreme Court, where each opinion is typically written by one justice from either side of the legal spectrum. As a result, they sign their name on the verdict and it is credited to them in public discussion and historical records. 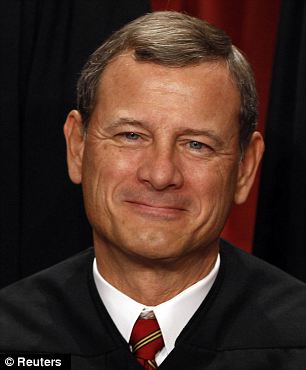 Swing vote: By switching to the liberal side, Roberts effectively insured that the Affordable Care Act passed

Because it was supposedly done as a united effort, however, the minority health care opinion was left unsigned.

Salon reported today, however, that the reason why the minority opinion was left unsigned was because it was written mostly by the Chief Justice before he made the switch to the liberal side.

Paul Campos wrote that a source ‘within the court with direct knowledge of the drafting process’ said that ‘most of the material in the first three quarters of the joint dissent was drafted by Chief Justice Roberts’ chambers’.

The question of what role he actually played in the minority’s report will undoubtedly be speculation until one of the nine notoriously tight-lipped justices publicly confirms the rumors.

As for Mr Roberts himself, he is shying away from any such statements.

At a conference of 300 judges in Pennsylvania on Friday, he declined to answer any questions about the health care decision. He went on to say that it does not bother him that he cannot directly answer his critics.

Instead, he was focusing on enjoying his summer break.

‘Malta, as you know, is an impregnable island fortress. It seemed like a good idea,’ he said of his then-pending trip.