The Fight for @YourAnonNews and the Missing $35,000 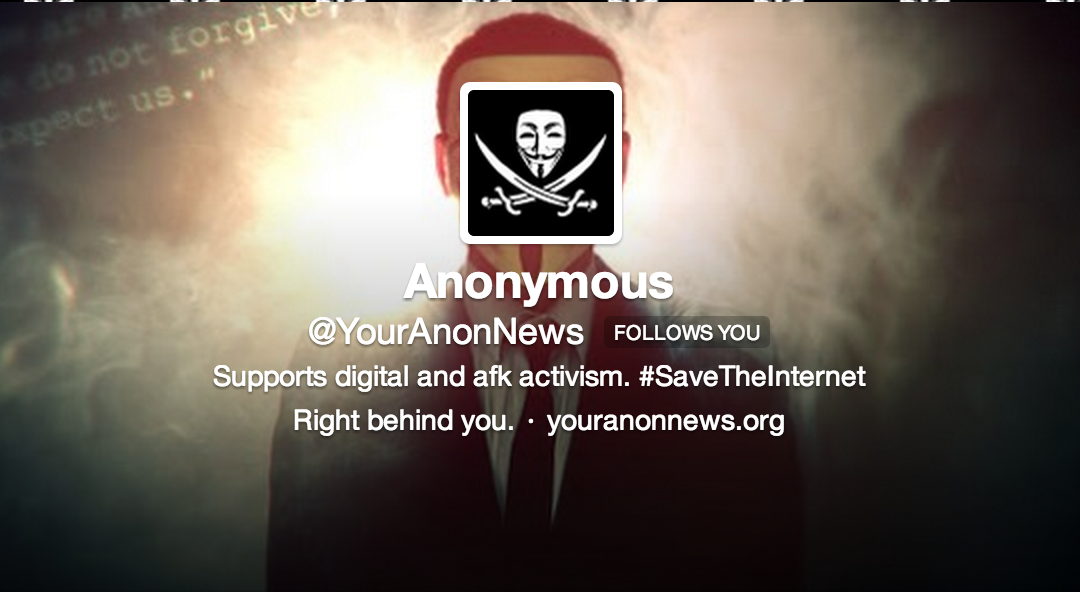 The @YourAnonNews Twitter account has been at the centre of a major upheval in the Anonymous community in the last few days, centring on missing funds of $35,000. Twitter

“A man may die, nations may rise and fall, but an idea lives on. Ideas have endurance without death.” – John F. Kennedy

Anonymous is just such an idea.

However details about in-fighting, backstabbing and missing fundraising donations which were made public over the weekend, threaten to undermine the trust people have in the movement – and especially one of its most prominent voices.

Your Anonymous News (@YourAnonNews) is one of the best known and loudest voices within the Anonymous group of hacktivists, but the person most associated with its operation, Christopher Banks (aka Jackal) has been accused of stealing $35,000 (£20,720) from a fundraising campaign which was designed to help build a new website for the account.

The details about what has happened over the weekend and prior to the events beaming public are confusing and contradictory depending on who you talk to, so let’s first go back to the beginning.

As I said, Anonymous is an idea rather than a specific group of people, but certain voices within the movement came to the fore in the last few years.

Chief amongst these was the Twitter account @YourAnonNews which was created in April 2011 and was run primarily by a member of Anonymous known as Jackal.

Jackal was in fact Christopher Banks who lived in Denver, and over the next three years the account grew to become the most powerful voice within Anonymous. It currently has over 1.24 million followers.

While Jackal was in charge, running the account alone became too much work and so multiple members of Anonymous were brought on board to help out. At one point up to 25 people had access to the account and it was so well organised, it even had a highly detailed style guide.

In early 2013, Jackal and a few of the other prominent people running the account decided that they wanted to build a website with the goal of creating “a weekly news show, provide embedded coverage of direct actions, and run a new website to help ignite protest and DIY journalism around the world.”

The group turned to Indiegogo, the crowd-funding website and having set out with a goal of raising just $2,000, within weeks it saw 1,307 people donating a total of $54,668.

There were questions raised at the time about the logic of donating money to a project which was so ill-defined – and over a year later those concerns look to have been validated.

According to a Truth and Reconciliation document published this weekend, the donations were received by Jackal minus deductions from Indiegogo (4%) and credit card fees (3%).

The money was then used to pay for the merchandise which was promised in return for donations, including t-shirts, mugs, buttons, and stickers. The money was also used to buy laptops, broadband access and server time.

This was to become the crux of a dispute among those who took charge of YourAnonNews in late 2013.

In October of 2013, Dell Cameron, a reporter with the Daily Dot and someone who had been involved with the Anonymous movement since the Arab Spring, got involved with the account and quickly realised there was something wrong.

None of the merchandise had been posted and there was no sign of the remaining money.

Cameron decided that he needed to get legal advice because, as he told IBTimes UK: “I was taking ownership of an account that had been used to commit a crime.”

Cameron along with others involved with the account including Nicole Powers, Gregg Housh and lawyer Tor Ekeland, came together to form a de facto board to try and administer the account. Their plan was to move the intellectual property into a non-profit organisation which would run the account in the future.

The first point of business was to raise money in order to send out all the merchandise, which was done by raising private donations of $9,000.

At this point Banks still had access to the @YourAnonNews account and this was something Cameron was not happy with, but he was willing to let it be while the group tried to get answers from him about the missing money.

This situation continued until last week, when Cameron – along with Dan Stuckey, a reporter for Vice who was brought on board the @YourAnonNews account – told Ekeland at a meeting in New York that they were going to take control of the account and shut everyone else out.

Ekeland was able to talk them out of making a rash decision at the time, but in the middle of the night on Friday morning, Cameron went ahead with his plan and locked Ekeland, Powers and Housh out of the account, as well as Banks – a move Cameron claims was done with the consent of seven other YourAnonNews contributors.

What followed was the cyber equivalent of mud-slinging with wild rumour and speculation being thrown around on social media channels.

Gabriella Coleman, professor at McGill University and an expert on Anonymous, told IBTimes UK that she has never seen anything like what happened on Thursday and Friday last week, when there were so many rumours being slung around various channels online.

It led the three exiled account members to publish the Truth and Reconciliation document on Saturday in an attempt to explain the situation.

By the time the document was published however, Cameron had already relinquished control of the account, following widespread criticism of his usurping of power. Control of the account was handed over to a group of Anonymous members based in Denver, who continue to operate it.

A deal with the devil

Speaking to both Cameron and Ekeland to try and find out exactly what happened, it’s clear there is a difference in opinion.

Cameron believes that Ekeland had done a deal with Banks which would simply brush the missing $35,000 under the carpet and allow him continue using the account – though without anyone knowing this publicly. This was unacceptable to Cameron.

Ekeland admitted he was indeed talking to Banks, but that they were only at the point of negotiation, and that any deal would have been brought to the board for approval, something Ekeland says Cameron was fully aware of.

A email sent by Cameron relating to the situation was also leaked over the weekend, in which Cameron makes potentially libellous and unsubstantiated claims about where the $35,000 went.

“You’re going to f**king regret it”

Cameron says he has personally asked Banks 12 times where the money is, and each time he has refused to give an answer. So far, Banks has remained silent on Twitter about anything to do with this debacle.

Cameron claims he was threatened by Ekeland before the email was leaked, saying: “He didn’t get specific, but he said if you publish a letter like this, you’re going to f**king regret it.”

Ekeland flatly denies that he threatened Cameron adding that he is happy to be no longer involved with the account, having immediately resigned from the board once Cameron locked him out of the account on Friday morning.

Ekeland likened the in-fighting over the @YourAnonNews account to the ring in The Lord of the Rings: “It drives people crazy, they get greedy for it, everyone wants it.”

Ekeland accused Cameron of wanting control of the feed for personal gain, something the Daily Dot reporter denies, claiming he only wanted “to do good” when he joined up.

Despite being the opposite side of the argument, Cameron echoes Ekeland’s sentiments:

“At the end, this is not about Anonymous, this is about a group of people fighting over a social media account. These are grown people squabbling like kids over the equivalent of a toy in the sandbox.”

Coleman believes that YourAnonNews was close to imploding and that while the Truth and Reconciliation statement which was published on Saturday “may not be enough to save them, it is the wedge that gives them a chance [to survive].”

Numerous Anonymous accounts have been highly critical of the group over recent months for failing to make a public statement on the matter.

In the wake of the statement being made, while there is some appeasement, others believe that the YourAnonNews brand is tarnished forever and should be let to disappear completely.

Coleman counters that the rebirth like this should be expected:

“The strength of Anonymous is to have some points of stability but to be ad hoc and reborn. And it is definitely a great period to be reborn – whether that is going to happen or not is always an open questions.”

What the long-term impact this fiasco will have on @YourAnonNews – and more widely on the Anonymous movement – isn’t clear at this point.

What is clear is that $35,000 of donor’s money is still missing and unaccounted for, and the fight for control of the hugely popular and powerful @YourAnonNews account looks to be only just beginning.