The Little-known Dark Side of Ender’s Game 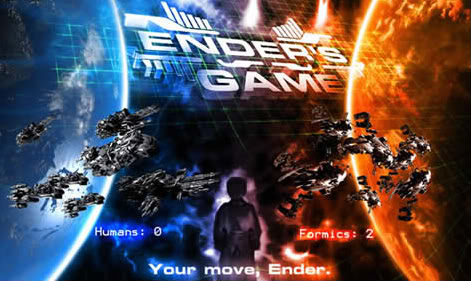 Summary:  A follow-up to “Generals read Ender’s Game” and see their vision of the future Marine Corps, exploring how it appeals to our dark side — with even darker historical echos.  Valuable reading for USN midshipmen and USMC privates, PFCs, and Lance Corporals.

One aspect of its mass appeal: it tells the story of modern America.  The world’s superpower — bigger, richer, stronger than any other nation — but we see ourselves as victims.  Forced to invade our Latin neighbors, repeatedly, to see that our businessmen get a fair deal.  Pearl Harbor and 9/11, forcing us to bomb nations into oblivion (the total weight of bombs dropped on Vietnam was 3x what we used in WWII, aprox 1,000/person).  But we remain pure in our own eyes because our motives are pure.

Others see its appeal in the personal history of its readers:  “Creating the Innocent Killer: Ender’s Game, Intention, and Morality“, John Kessel, update of an article originally published in Foundation – the International Review of Science Fiction, Spring 2004 — Excerpt:

Ender gets to strike out at his enemies and still remain morally clean. Nothing is his fault. Stilson already lies defeated on the ground, yet Ender can kick him in the face until he dies, and still remain the good guy. Ender can drive bone fragments into Bonzo’s brain and then kick his dying body in the crotch, yet the entire focus is on Ender’s suffering. For an adolescent ridden with rage and self-pity, who feels himself abused (and what adolescent doesn’t?), what’s not to like about this scenario?

Needless to say most of the people I know who Really Love the book aren’t soldiers, they’re socially-malformed geeks who’re attracted to the ‘meritocratic’ vision of the genius freak, ‘precociously’ outwitting everyone around him, morally pure though his thoughts are bloody and selfish, who wins battles with his brain but secretly is almost superhumanly effective at physical tasks – which you’d never guess to look at him.

Card’s writing comes, I think, from a more plainly geeky wish-fulfillment urge, and is a way of placing the misunderstood genius/asshole at the center of the moral universe. It’s no wonder that Ender spends most of his time lecturing his peers (moral/intellectual inferiors) and playing video games, and it’s no wonder so many people at (e.g.) MIT, where Ender’s Game is a kind of shared keystone text, live identical or very similarly narcissistic lives. The dominant social pathologies at MIT line up neatly with Ender’s own.

For such people, I think, the military side of the story functions on several levels: at once you (as Ender) can outwit the System, freak out the guys in uniform, and yet vicariously live through the quasi-military exploits of Battle School. The appeal of the book is then partly the faux-countercultural appeal of sticking it to the Man by listening to loud rock music while you work 60-hour weeks at the office, being cool rather than doing anything cool, or anything at all. Ender’s moral purity has nothing to do with his actions; it’s adversity that has blessed him.

(2)  The powerful and often weird aspects of Ender’s Game

From the best analysis of the book, a chapter in Science fiction in the real world by Norman Spinrad (1990):

Card has faithfully followed the plot skeleton. He writes a terse, well-paced, transparent line of prose that expertly moves the reader through the story without calling attention to itself, which is the stylistic ideal of the pulp tradition.  It is not surprising, therefore, that Ender’s Game would be a successful work of commercial sci-fi. But it ended up winning both the Hugo and the Nebula and, indeed, made Card’s commercial career. Yet from the plot-summary, it is not so easy to see why such a work should stand out from the pack.

Something must be going on at a deeper level.  Something certainly is.  For one thing, there is a truly bizarre subplot, in which Ender’s brother Paul and sister Valentine take over political leadership of the Earth while still in their teens. They do this by creating pseudonymous letterhack personas who debate each other on a worldwide computernetwork bulletin board. I kid you not, you could look it up.

For another thing, Ender, Valentine, and Paul simply do not come off as the young children Card tells us they are. Their speech patterns, their level of intellection, the style of their interaction with their peers, what they say, and what they do all mark them as adolescents.

Except for one factor. Superficially, at least, sex never rears its head. What Card gives us in the guise of young children are desexualized adolescents.  Well, not exactly, for beneath the surface there certainly is a strong sexual subtext in Ender’s Game. Paul and Ender compete throughout the novel for the affections of sister Valentine, and in the denouement, Ender, the hero, gets the girl. Valentine goes off with Ender to colonize the home planet of the aliens in a complex, hurried, over-dense final chapter that reads like an outline for a whole other novel, while poor Paul must content himself with being ruler of the solar system.

Why has this novel struck such a strong chord with SF readers? The main plot would seem to be a rather ordinary variation on the standard plot skeleton. Card’s realization of his future civilization is narrowly confined to a few self-contained locales and game-realities, the subplot is entirely unbelievable, and the main character relationship is a thinly sublimated incestuous love triangle.

No, the strength of Ender’s Game as a piece of sci-fi can’t rest on the plot, or the uniqueness of the speculation, or the world building, all of which, while certainly craftsmanlike, are no stronger than similar jobs of work in hundreds of novels.  But when we compare the psychic profile of the typical sci-fi fan to the characters Card has created as reader- identification figures, we see at once why Ender’s Game does such a world-class job of pushing the buttons of the targeted audience.

Talk about sympathetic heroes with whom the reader can identify! How about a sexually arrested adolescent who becomes the savior of the human race through his prowess at war-sports and video games? How about two other sexually arrested adolescents who take over the world as electronic fanzine letterhacks?  This is as close as identification of the audience with the hero can get — the identification figures are the audience’s fantasy images of themselves.

… It is difficult to believe that such a writer would name the central figure in his incestuous love triangle Valentine (as in Be My Valentine) were he not deliberately pointing to the nature of the relationship.

Even more difficult to believe that he was unaware of the obvious sexual connotations when he named his aliens the “Buggers.” That’s right, the insectoid aliens who are never really described, aren’t called “Bugs” or “Bug-Eyed Monsters,” but Buggers throughout the whole novel. The little boys and girls, the desexualized adolescents, are trained by the adults to go out and fight buggers, and Ender, the hero, wins his Valentine, at least in plot terms, when he exterminates Buggery.

What is Card actually addressing in this subtext? He’s certainly playing with powerful symbology! Incest, buggery, genocide, and power fantasies lurking darkly below the surface of his supposedly desexualized adolescents, and in the context of a militaristic milieu that seems to indicate that he is groping toward some libidinal equation between military power fantasies, war games, and the sublimated sexual dynamic.  Alas, all this powerfully evoked psychosexual subtext never coheres into a comprehensible thematic statement, nor does it really seem to mesh with the overt storyline in a way that adds resonance.

(3)  Ender as an appealing Hitler-like figure

Let me tell you about a book I just read.  It’s the story of a young boy who was dreadfully abused by the grown-ups who wanted to mold him into an exemplary citizen. Forced to suppress his own emotions in order to avoid being paralyzed by trauma, he directed his energy into duty rather than sex or love. In time, he came to believe that his primary duty was to wipe out a species of gifted but incomprehensible aliens who had devastated his kind in a previous war. He found the idea of exterminating an entire race distasteful, of course. But since he believed it was required to save the people he defined as human, he put the entire weight of his formidable energy behind the effort to wipe out the aliens.

You’ve read it, you say? It’s Ender’s Game by Orson Scott Card, right? Wrong. The aliens I’m talking about were the European Jews, blamed by many Germans for gearing up World War I for their own profit. The book is Robert G. L. Waite’s The Psychopathic God: Adolf Hilter.

… Hitler, like Ender, spent his formative years as the third of three children. Like Ender, he eventually grew away from all of his family except his older sister. The main difference is that it was her daughter, and not Angela herself, with whom he engaged in a chaste but emotionally compelling love affair. … Similarly, both children’s lives were deformed by physical and emotional abuse. Ender escapes the abuse of his peers to join the Battle School — where he is, of course, abused by adults. Hitler was literally treated like a dog by his father, who expected him to answer to his whistle and accept vicious beatings …

Ender’s chastity until his marriage at the age of 37 is puzzling. But, again, when we look at the Hitler connection, all becomes clear. Probably because of his childhood trauma, Hitler remained chaste for an unusually long time. He isn’t known to have felt love for any woman until — are you ahead of me here? — age 37.

Another bizarre element is the fact that Ender chooses a bitter, self-destructive woman for his mate. Why? I presume it’s to remind us that Hitler too chose self-destructive women. Of the seven close to him, six killed themselves or made serious attempts to do so.

EX-SPY ANDREA DAVISON SET-UP BY BRITISH GOVERNMENT – IS SHE WITH JULIAN ASSANGE?