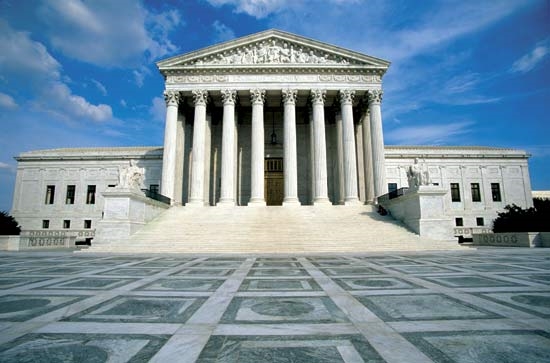 The Supreme Court refused to hear a case on Tuesday that holds telecom companies accountable for letting the National Security Agency spy on unknowing Americans without a warrant. Dating back to 2006 when the American Civil Liberties Union and the Electronic Frontier Foundation first filed the class-action lawsuit, the case accuses AT&T of providing the NSA with customers’ personal information — phone calls, emails and web browsing history — without seeking a court order. Verizon and Sprint are also mentioned. The plaintiff, former AT&T technician Mark Klein, even provided internal documentation that showed evidence of the NSA surveilling Americans’ Internet traffic from a secret room in San Francisco. That case, Hepting v. AT&T, has now been thrown out, and the Supreme Court didn’t even comment on why.

This sound very important! After all, doesn’t the Constitution protect American citizens from being spied on by their government without their knowledge or consent? Well, yes and no. Warrantless wiretapping sounds invasive and terrible, sure, but it’s actually technically legal under a 2008 law that retroactively granted immunity to all of the telecom companies that were spying on Americans at the government’s behest. Unsurprisingly, the practice can be traced back to President George W. Bush’s anti-terrorism program following the 2001 World Trade Center attacks. Once things calmed down and people actually started suing the government for eavesdropping on everyday Americans, Congress passed the FISA Amendements Act. (FISA stands for the original law, the Federal Intelligence Surveillance Act.) That law is currently up for renewal in Congress.

As Wired points out, neither the Bush administration nor the Obama administration has confirmed or denied allegations of warrantless wiretapping. They’ve both argued that the surveillance program is a state secret and any sort of disclosure would endanger national security. The EFF doesn’t buy this argument. “The government still claims that this massive program of surveillance of Americans is a state secret, but after eleven years and multiple Congressional reports, public admissions and media coverage, the only place that this program hasn’t been seriously considered is in the courts — to determine whether it’s legal or constitutional,” said Cindy Cohn, the EFF’s legal director. “We look forward to rectifying that.”

Indeed, Heptig v. AT&T is not the civil liberties advocates’ last hope at gaining some clarity on the warrantless wiretapping issue. In a separate case, the EFF sued the government directly, rather than going after the telecom companies. The case was tossed out by a district court judge only to be picked up by the 9th Circuit Court of Appeals, where Judge Margaret McKeown ruled that the EFF’s arguments “are not abstract, generalized grievances and instead meet the constitutional standing requirement of concrete injury.”

That case will be heard in December. Until then, be careful what you say on the phone. You know who is listening.