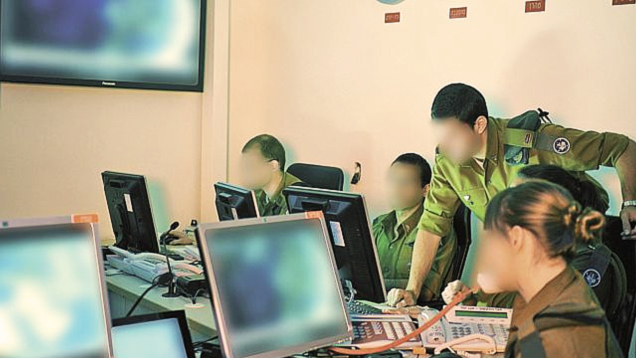 Scores of former members of Israeli military intelligence’s very secret and quite elite Unit 8200 have publicly refused to collect information that is “used for political persecution” or “driving parts of Palestinian society against itself.”Courteous allies at the NSA, we now know, helped make that spying possible.

Among his most shocking discoveries, he told me, was the fact that the NSA was routinely passing along the private communications of Americans to a large and very secretive Israeli military organization known as Unit 8200. This transfer of intercepts, he said, included the contents of the communications as well as metadata such as who was calling whom.

Typically, when such sensitive information is transferred to another country, it would first be “minimized,” meaning that names and other personally identifiable information would be removed. But when sharing with Israel, the NSA evidently did not ensure that the data was modified in this way.

Mr. Snowden stressed that the transfer of intercepts to Israel contained the communications—email as well as phone calls—of countless Arab- and Palestinian-Americans whose relatives in Israel and the Palestinian territories could become targets based on the communications. “I think that’s amazing,” he told me. “It’s one of the biggest abuses we’ve seen.”

As of last week, exactly 43 ex-members of Unit 8200—many young and active reservists who could theoretically be called again to serve Israel at a moment’s notice—passionately agree.

In an act of protest that had been planned well in advance of this summer’s brutal bombing campaign in Gaza (which you may have heard killed 2,100 Palestinians and turned Gaza City into the lunar ruins of an ancient alien race), the young members of Unit 8200 drafted a long letter publicly refusing to participate in any further intelligence gathering activities against the Palestinians.

“The Palestinian population under military rule is completely exposed to espionage and surveillance by Israeli intelligence. It is used for political persecution and to create divisions within Palestinian society by recruiting collaborators,” the letter says. Adding, “In many cases, intelligence prevents defendants from receiving a fair trial in military courts, as the evidence against them is not revealed.”

“Contrary to Israeli citizens or citizens of other countries,” whose rights are protected under law, the letter points out, “there’s no oversight on methods of intelligence or tracking and the use of intelligence information against the Palestinians, regardless if they are connected to violence or not.”

London-based newspaper The Guardian interviewed several of the unit’s conscientious objectors under the condition of anonymity—which was requested not out of fear of persecution, but out of the desire to comply with Israeli law. (Only the copies of the letter sent to their unit commander used the objectors’ full names.)

The individual accounts made by the former military intelligence agents,published by the Guardian and Israel’s Yediot Aharonot newspaper, are numerous and depressingly perverse.

Among the personal statements, agents disclosed that the majority of Unit 8200’s operations in Palestine targeted “innocent people unconnected to any military activity.” The unit was instructed to keep any personal information potentially embarrassing or damaging to a Palestinian’s life, including sexual preferences, extramarital affairs, financial trouble, family illnesses, or anything else that could be “used to extort/blackmail the person and turn them into a collaborator.” The private “sex talk” intercepted by Palestinians (in what’s becoming a gross trend for these surveillance scandals) were allegedly passed around by certain members of the unit for titters/yucks.

One member, referred to as “D” by the Guardian, formerly a 29-year-old captain who served in the unit for eight years, told the paper that part of his decision to protest came from the dawning realization that his actions were really no different than those of any totalitarian government’s secret police.

“It was when I realized that what I was doing was the same job that the intelligence services of every undemocratic regime are doing,” he said.

There have been many precursors, both historically and more recently, to this secretive alliance between Israeli and U.S. intelligence agencies. Back in Mad Men times, the CIA’s director of counter-intelligence, legendary super-spook James Angleton, practically contracted all of the CIA’s North African operations to the Mossad along with a generous aid package, and has often been said to have helped found their agency in 1951. During the more recent disclosures regarding the NSA’s (basically illegal) surveillance program STELLAR WIND, agency whistleblowers revealed that two Israeli companies, Verint and Narus, were contracted to manage the actual bugging of America’s telecommunications network.

Apart from the Mossad’s long, aggressive history of spying on the United States, the arrangement also provoked concerns due to corruption within one of the firms; Verint’s founder and former chairman Kobi Alexander was added to the FBI “most wanted list” in 2006 regarding various forms of stock fraud and fought against extradition for many years. Some former agency employees have also reported that a mid-level NSA employee friendly with Israeli intelligence unilaterally decided to hand over advanced analytical and data mining software that the agency had developed internally for its own international eavesdropping operations. (According to a piece by James Bamford in WIRED, that software is now also in the hands of many private Israeli companies.)

In all that context, it’s true that this recent news isn’t exactly surprising or shocking—the kind of lame, bullshit “take” pundits and anonymous commenters always love trotting out to congratulate themselves for their knowledgeable cynicism. (Seriously: Good for you guys.)

What it still is—obviously and regardless of this context—is abhorrent and genuinely scandalous for a country, like Israel, that loves positioning itself as a bastion of democracy in the autocratic Middle East.

Perhaps, we should start looking for some fresh perspectives on how best to resolve this ongoing humanitarian crisis.

[photo of an Israeli Defense Force Situation Room—really actually already redacted like that—via the IDF Spokesman’s Office by way of Haaretz; June 2014 photo of an Israeli soldier carrying a computer tower seized during the search for three Israeli teenagers believed to be kidnapped by Palestinian militants, by Hazem Bader/AFP/Getty Images]