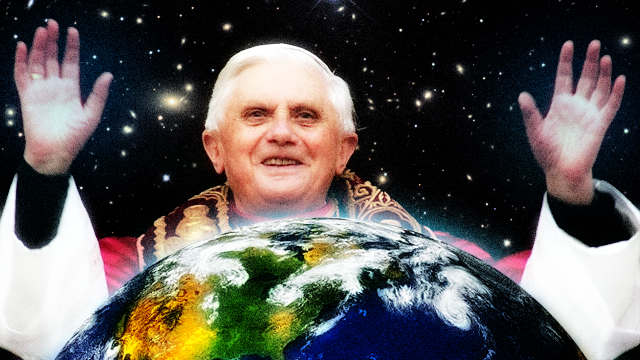 The Vatican Pontifical Academy of Sciences has just released a strongly worded report (PDF) on global climate change demanding in the strongest possible language that humans act decisively to avert a coming crisis. “We call on all people and nations to recognize the serious and potentially reversible impacts of global warming caused by the anthropogenic emissions of greenhouse gases and other pollutants,” says the report. “If we want justice and peace, we must protect the habitat that sustains us.”

The report was not authored by the Pontifical Academy itself; rather, the Vatican convened a group of scientists with relevant experience, along with a few Nobel Prize winners. The group’s focus was on increasing evidence of glacier retreat, and the report ended up focused on its causes. The group’s co-chair, Nobel Laureate Paul Crutzen, used a somewhat controversial name for the “man-made” geologic era in which we are now living: the “Anthropocene.”

Humanity has created the Anthropocene era and must live with it. This requires a new awareness of the risks human actions are having on the Earth and its systems, including the mountain glaciers discussed here. It imposes a new duty to reduce these risks. Failure to mitigate climate change will violate our duty to the vulnerable of the Earth, including those dependent on the water supply of mountain glaciers, and those facing rising sea level and stronger storm surges. Our duty includes the duty to help vulnerable communities adapt to changes that cannot be mitigated. All nations must ensure that their actions are strong enough and prompt enough to address the increasing impacts and growing risk of climate change and to avoid catastrophic irreversible consequences.

According to the Vatican report, those consequences have already begun. “Human-caused changes in the composition of the air and air quality result in more than 2 million premature deaths worldwide every year and threaten water and food security—especially among those ‘bottom 3 billion’ people who are too poor to avail of the protections made possible by fossil fuel use and industrialization.”

Because “business as usual” won’t be possible in the future, the report asks for three immediate actions:

Sound expensive? It is, but the report claims that “the cost of the three recommended measures pales in comparison to the price the world will pay if we fail to act now.”

The report suggests that action is necessary as a matter of social justice, especially for the poor. It also ties action to the biblical idea of “stewardship” for the Earth, described here as “a planet blessed with the gift of life.” Finally, it aligns its conclusions to the line in the Lord’s Prayer about “daily bread,” asking that “all inhabitants of this planet receive their daily bread, fresh air to breathe and clean water to drink.”

It concludes: “The believers among us ask God to grant us this wish.”