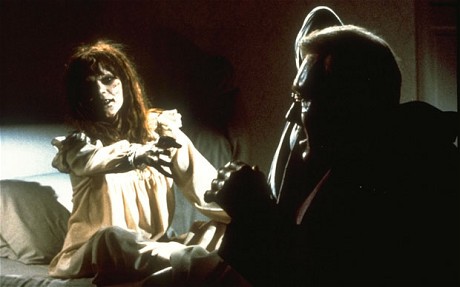 A surge in Satanism fuelled by the internet has led to a sharp rise in the demand for exorcists, the Roman Catholic Church has warned.

Image 1 of 2
Sorry readers – I should have put my face on.

By Nick Squires, in Rome

The web has made it easier than ever before to access information on Devil-worshipping and the occult, experts said.

Exorcism is the subject of a six-day conference being held this week at the Regina Apostolorum Pontifical University in Rome, which is under the Vatican’s authority.

“The internet makes it much easier than in the past to find information about Satanism,” said Carlo Climati, a member of the university who specialises in the dangers posed to young people by Satanism.

“In just a few minutes you can contact Satanist groups and research occultism. The conference is not about how to become an exorcist. It’s to share information about exorcism, Satanism and sects. It’s to give help to families and priests. There is a particular risk for young people who are in difficulties or who are emotionally fragile,” said Mr Climati.

The object of seminars was to scrutinise the phenomenon of Satanism with “seriousness and scientific rigour”, avoiding a “superficial or sensational approach”, he said.

The conference in Rome has brought together more than 60 Catholic clergy as well as doctors, psychologists, psychiatrists, teachers and youth workers to discuss how to combat the dangers of Devil-worship.

Organisers say the rise of Satanism has been dangerously underestimated in recent years.

“There’s been a revival,” said Gabriele Nanni, a former exorcist and another speaker at the course.

In theory, any priest can perform an exorcism – a rite involving prayers to drive the Devil out of the person said to be possessed.

But Vatican officials said three years ago that parish priests should call in professional exorcists if they suspect one of their parishioners needs purging of evil.

An exorcist should be called when “the moral certainty has been reached that the person is possessed”, said Father Nanni, a member of the Vatican’s Congregation for the Causes of Saints.

That could be indicated by radical and disturbing changes in the person’s behaviour and voice, or an ability to garble in foreign languages or nonsensical gibberish.

While the number of genuine cases of possession by the Devil remained relatively small, “we must be on guard because occult and Satanist practices are spreading a great deal, in part with the help of the internet and new technologies that make it easier to access these rituals,” he said.

The Vatican’s chief exorcist claimed last year that the Devil lurked in the Vatican, the very heart of the Catholic Church.

Father Gabriele Amorth said people who are possessed by Satan vomit shards of glass and pieces of iron, scream, dribble and slobber, utter blasphemies and have to be physically restrained.

He claimed that the sex abuse scandals which have engulfed the Church in the US, Ireland, Germany and other countries, were proof that the anti-Christ was waging a war against the Holy See. He said Pope Benedict XVI believed “wholeheartedly” in the practice of exorcism.

Vatican Calls for World Government and a New World Order