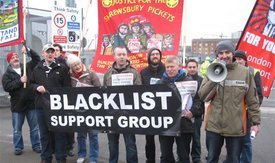 Corporations in the UK who used a secret “blacklisting” database to screen out ‘left wing trouble-makers’ and union sympathizers as potential job recruits are facing renewed scrutiny after the UK-activist group Liberty called for a fresh investigation Monday night.

A demonstration outside the Olympic site on March 1, 2011 was called in solidarity with the whistleblower who was fired for standing up for an illegally blacklisted workmate. The blacklist scandal first broke in 2008, when the UK media revealed that more than 40 leading employers had subscribed to the vetting service provided by The Consulting Association, which had surveillance files on more than 3,200 workers, including political activists, shop stewards and health and safety representatives.

Police seized the database three years ago and Ian Kerr, the founder of The Consulting Association, was fined only about $7,500. Invoices were discovered showing that 44 companies had paid to access the names on the list.

But full details of the material it contained only emerged as workers began to pursue legal action over their inclusion.

Liberty is now threatening to go to court to force the UK government to investigate the case, which it has compared in severity to the national press phone hacking scandal.

Corinna Ferguson, legal officer for Liberty, told the Independent: “We can’t believe the inaction of the Information Commissioner on a human-rights violation of such wide public interest.

“Contracting out the blacklisting of innocent workers, politicians and journalists is no better than farming out phone hacking to private detectives and the consequences for our democracy are just as grave. If we cannot persuade the Commissioner to discharge his public duty, we will consider seeking assistance from the courts.”

Statements from some of the blacklisted workers from the Blacklist Support Group (BSG):

Mick Abbott, a 74-year-old ex-scaffolder, commented: “This nearly ruined my marriage and it meant that my children were on free meals at school. My file goes back to 1964 and the last entry says that I rekindled the campaign for justice for the Shrewsbury picketers in 2006. They have been watching me all these years and passing this information around, blighting my life over four decades.”

Steve Kelly, an electrician and spokesperson for the Blacklist Support Group said: “I was blacklisted because I was a union member and because I raised issues about safety. In 2007, [Sir Robert] McAlpine sacked me from the Colchester Barracks project after 2 days for refusing to work on a moving platform without proper training (exactly as we had been instructed in the site induction) – the dismissal is recorded on my blacklist file.

“Over the year I suffered severe financial strain, my wages were cut in half which caused immense stress paying bills and putting food on table. I was out of work for a year apart from few weeks here and there in 2001. Being sacked from Colchester Barracks after only two days piled up the stress and caused a nervous breakdown for me eventually.

“The blacklisting firms should be made to pay compensation for years lost and years in future. They should be made to employ blacklisted workers or not be awarded any public government backed contracts. An apology in national press and to individuals whose lives they ruined would be a start.”