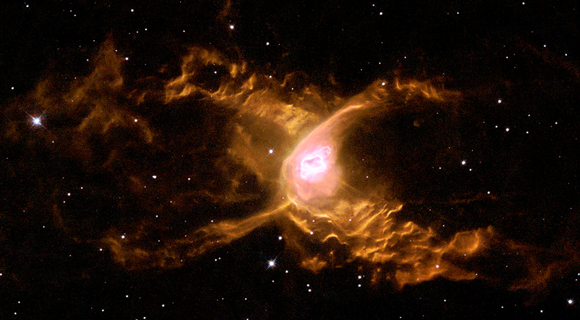 The powerful stellar winds of this nebula, located in the constellation of Sagittarius, generate waves 100 billion kilometers high. The waves are caused by supersonic shocks, formed when the local gas is compressed and heated in front of the rapidly expanding lobes. The atoms caught in the shock emit the spectacular radiation seen here.

Here, a bubbly ocean of glowing hydrogen, oxygen, and sulfur gas mingle in the extremely massive and luminous molecular nebula Messier 17. Also known as the Omega or Swan Nebula, M17 is a hotbed of star formation, located about 5500 light-years away in the Sagittarius constellation.

A dark interstellar cloud ravaged by the passage of Merope, one of the brightest stars in the Pleiades star cluster, at a relative speed of roughly 11 kilometers-per-second. 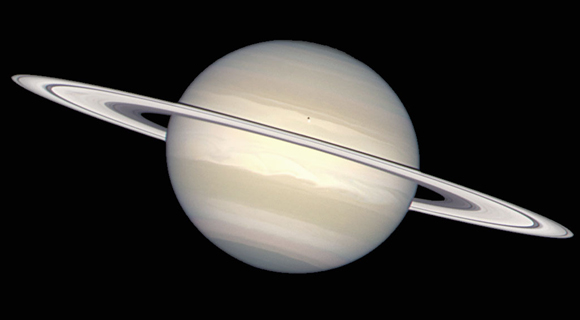 Using special image processing, astronomers created a crisp, extremely accurate view of Saturn, highlighting the planet’s pastel colors. The bands of subtle yellows, browns, and grays indicate differences in the clouds over the second largest planet in the solar system. 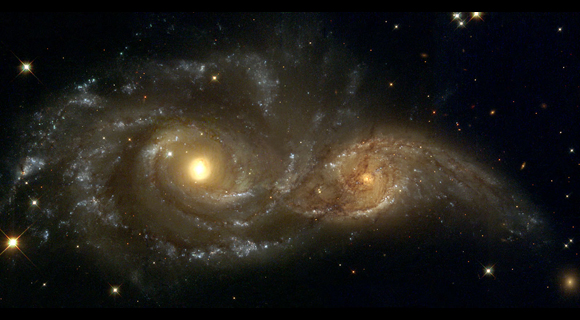 In the direction of the constellation Canis Major, two spiral galaxies pass each other like giant astral ships in the night.

The Horsehead Nebula, located in the constellation of Orion, rises in a cold, dark cloud of gas and dust like a mythical sea horse. The bright area at the top left-hand edge is a baby star whose radiation is eroding its gaseous nursery. A massive star, located just outside Hubble’s view, is also sculpting the top of the Horsehead.

The chaotic activity atop a pillar of gas and dust, inside a stellar nursery called the Carina Nebula, is three light-years tall. The turbulence of the so-called “Mystic Mountain” nebula signals the infant stars growing intensely within.

Once about five times the mass of the Sun, a star is at the center of this nebula’s fury, known as a planetary nebula for the orbital-shape it has when seen through amateur telescopes. Its dainty butterfly wings are actually roiling cauldrons of gas at a temperature of 20,000 degrees Celsius, flowing at over 950,000 kilometers-per-hour, which is fast enough to travel from Earth to the Moon in 24 minutes.

Here, a collision between two galaxies in Corvus has been captured in a composite image generated by Hubble (gold), the Chandra X-ray Observatory (blue), and the Spitzer Space Telescope (red). In a collision like this, one galaxy can still rip the other apart gravitationally, even if the stars within usually do not collide. That’s because stars make up only a very tiny percentage of space within a galaxy. Instead, dark dust pillars show where massive molecular clouds are being compressed during the galactic encounter, causing the rapid birth of millions of stars. The most massive of those stars will have already spent their millions-of-years long lives and exploded into supernovas.

The collision started 100 million years ago and is still happening.