Why I arrested Donald Rumsfeld 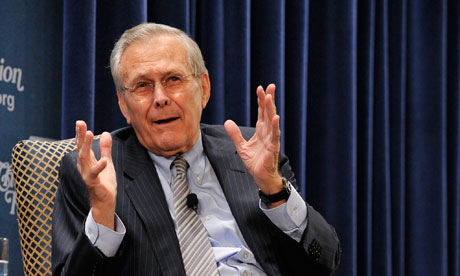 On Monday 26 September, three members of Veterans For Peace and a member of Code Pink confronted Donald Rumsfeld at a Boston stop of his book tour. I attempted to make a citizen’s arrest. Police hustled all four of us out, while a hostile rightwing crowd shouted and jeered. To get in, we had to dress nicely, pay $50 and give Rumsfeld a standing ovation so that we did not stand out from this crowd. The $50 got you a copy of his book, which I could not stomach taking. Once Rumsfeld started talking, at two-minute intervals, one of us got up to confront him.

Donald Rumsfeld, George Bush, Dick Cheney, Condoleezza Rice and the rest of this crew are war criminals, according to international law. They lied about weapons of mass destruction in Iraq. They lied about Saddam Hussein being linked to 9/11. They lied about mobile weapons labs, yellowcake from Niger, how painless a war would be and countless other things. They instigated a program of torture in Guantánamo, Bagram and who knows how many other black sites. These lies were used as a pretext for initiating a war of aggression against a sovereign nation – an international war crime.

They are also guilty of violating the UN convention against torture (ratified by the US) and are responsible for the murder of hundreds of thousands of Iraqis and 5,000 Americans. Iraq has been devastated to the extent that, years later, many of its people still do not have 24-hour access to electricity. Much other infrastructure is destroyed in one of the oldest civilisations on the planet. Millions of Iraqis are refugees in other countries.

War criminals such as these need to be confronted at every opportunity. This is already happening. They cannot travel freely in Europe for fear of being arrested. However, the problem is not restricted to the Bush administration. Barack Obama is also guilty of war crimes, as he has continued and expanded the wars in Iraq, Afghanistan, Libya, Pakistan, Somalia and Yemen. In all these countries, war and/or drone strikes have killed thousands of innocent people while doing nothing good and creating more people who hate American policy.

The real problem is the corporate-controlled government here and the military-industrial complex that President Dwight Eisenhower warned us about in 1961. The multinational corporate elite need to continue this policy of endless war, for profit, for resources like oil, and for global economic control. The military-industrial complex and the national security apparatus set up after 9/11 consume more than $1tn a year, while pensions, social security and Medicare are under attack. Rarely if ever mentioned by the corporate-controlled mass media is the enormous cost to taxpayers of war, the military and the national security state.

I became an activist in college at Harvard in 1968, at a time when there was a huge antiwar movement that, along with GI mutinies, stopped the Vietnam war. After being drafted into the US Army, I co-founded an underground GI newspaper in Germany. Militant mass nonviolent resistance – people demanding and creating real participatory democracy – is rising again against militarism and corporatism, and for human needs not corporate greed. Events in Tahrir Square have sparked the occupation of Wall Street in New York. An occupation of Freedom Plaza in Washington, DC, will begin on 6 October. As Bob Dylan wrote many years ago, “the times they are a-changin’.”