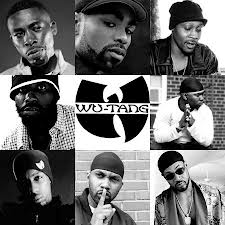 The Wu-Tang Clan is an elite group of ninja revolutionaries and mind control cult, under the leadership of reverend Bob Diggs, that arose in the early 1890s to challenge the authority of the various secret societies ruling the world, including the Illuminati, the Freemasons, Newscorp and the Spanish Inquisition. The Clan pledged to free the world from impending doom and usher in a brave new era in which everyone will be stoned, wear their own clothing line and talk in incomprehensible but nonetheless impressive speech, a.k.a Wu Ebonics.

Before Jay-Z and other members of the entertainment world were thought to belong to the Illuminati, rap group Wu-Tang Clan spoke of the mysterious organization many years ago. The Illuminati is believed to play a role in the exchange of power that has a hand in controlling the public on many different levels. They possess an influence that is detected in the movie, television, and music industries. Before the obsession with who belongs to the Illuminati really kicked off, it was about 1995 when members of the Clan sounded off about the Freemasonry, the Illuminati and a New World Order.

The June/July issue of Vibe (published in 1995) highlighted an article that included the thoughts of Wu Tang Clan group members Raekwon, U-God and Ghostface Killah, who discussed the possibility of changes coming in the year 2000. Raekwon mentions a videotape that they’ve watched, which speaks of the “Masons’ plan for New World Order. He says, “Right now, weâ€™re preparing for the Illuminati 2000, which is the Masonsâ€™ plan for New World Order. We got a videotape of these mothafuckas droppinâ€™ all types of sh*t about how they plan to run sh*t in the year 2000 and better.”

U-God agrees with Raekwon and adds that there are plans to place microchip implants in babies so that people can be found wherever they are. He also spoke of all money being replaced by plastic credit cards.

Raekwon continues in the article to state: “Brothers dont realize these are the last days. Thats why we so tightly knit. We gotta blow this sh*t up now, or else we aint gonna have another chance. When you really think this whole world is corrupted to an extent…everything! Illuminati is a belief, but at the same time, its no religion. We dealin with facts, just like we dealing with the planets and all that. Its deep.”

Another member of the group warns to stop speaking on the topic, and the conversation ends with their belief that people can get killed for talking about the subject. The rest of the Vibe article goes on to mention a book titled, ‘The New World Order’ printed by Publius Press, which highlights the conspiracies associated with the Illuminati.

The Wu-Tang Clan is a rap group from New York City that is recognized for their commanding, creative lyrics. Over the years, various members have mentioned theories of mind control and higher authorities programming music listeners with the types of music that get the most airplay and publicity. In their song, ‘Impossible,’ the group touches upon some of their beliefs regarding certain aspects of America that are meant to control and deceive the public. The intro starts the song by telling listeners that the lyrics will touch upon fate, destiny and the state of humanity, and later on, one member specifically mentions the Illuminati: “We want sanitary food / Planetary conquest / Thug peoples on some hard cold body sh*t / Get your sh*t together before the f**kin’ Illuminati hit.”

Other significant lyrics in the rap song include:

The Clan uses their words in the above lyrics to create imagery that highlights their views on technology taking over, and forces uses advanced technology to control and track communities. They feel that the government (or other entities) purposefully contaminates the population with disease so that they can sell vaccines and wealthy companies benefit from the profits.

Another twist to the tale of Wu Tang Clan in regards to the Illuminati is the belief that one of their former members, Ol Dirty Bastard was killed because of his views on the Illuminati. The rapper would speak openly about the secret organization and of suffering from “harassment from the government.” While some deemed the musician a drug addict and on the brink of insanity, you may also wonder about the common tactic of the Illuminati of making people appear crazy so that their words and messages are not taken seriously.