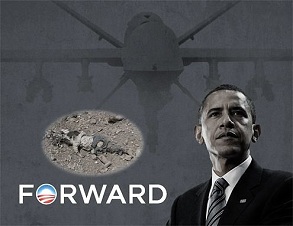 When Barack Obama took office, drone strikes were a once-in-a-while thing, with an attack every week or two. Now, they’re the centerpiece of a global U.S. counterterrorism campaign. Obama institutionalized the strikes to the point where he could hand off to the next president an efficient bureaucratic process for delivering death-by-robot practically on autopilot. Only now he’s the next president. Welcome to Obama’s second-term agenda for dealing with the world. As the Ramones sang: second verse, same as the first.

Early in the first term, then-CIA director Leon Panetta observed that drones were the “only game in town” for attacking al-Qaida in Pakistan. By that he meant invading a country for the third time in a decade was a nonstarter, and the flesh-and-blood spies needed to do a traditional intelligence operation weren’t available in sufficient numbers. So the Obama administration all but crafted its counterterrorism strategy around the drones, turning their surveillance and lethal operations into a bureaucratic apparatus led by White House aides with minimal outside oversight. The CIA and the Joint Special Operations Command, elite forces that rarely operate visibly, have the lead for implementing the robot-based agenda — and augmenting it with commando raids. Backstopping them are new tools to invade and disrupt enemy data networks.

The strikes have spread from Pakistan to Yemen to Somalia. And now that Obama’s been reelected, expect them to spread to Mali, another country most Americans neither know nor understand. The northern part of the North African country has fallen into militant hands. U.S.-aligned forces are currently plotting to take it back. The coming arrival of Army Gen. David Rodriguez, the former day-to-day commander of the Afghanistan war, as leader of U.S. forces in Africa is a signal that Obama wants someone experienced at managing protracted wars on a continent where large troop footprints aren’t available. Instead, Rodriguez will have to track, check and erode the spread of al-Qaida in northern and eastern Africa using drones and commando forces, available from his expanding bases in places like Djibouti. If all of this seems routine, that’s the point.

The Obama administration is doing something similar with cyber weaponry. It’s trying to make them a normal part of everyday conflict. Gone are the days when senior officers equivocated in public about their ability to disrupt enemy data networks. Now the Air Force talks openly about spending $10 million on new tools “to destroy, deny, degrade, disrupt, deceive, corrupt, or usurp the adversaries [sic] ability to use the cyberspace domain for his advantage.” The Pentagon’s futurists at Darpa have launched a new “Plan X” to routinize the corruption of enemy networks and the exfiltration of data within normal military operations. Routinization may actually be the wrong word: Darpa wants military malware that works like “the auto-pilot function in modern aircraft.” The Stuxnet worm that messed with Iran’s centrifuges was only the beginning.

All this might seem aggressive for a president who liked to say on the campaign trail that “the tide of war is receding.” But the tide of war never actually goes out. And the wicked-hard problems facing Obama’s national security team may only be getting under way.

First, Obama’s got to help Congress avert 9.4 percent annual, automatic cuts to practically every Defense Department program for the next 10 years, as both he and his defense secretary, Leon Panetta, are on record opposing them.

Next comes Iran. Israel’s Benjamin Netanyahu has suggested that he will feel the need to strike Iran by next summer. Obama has a stronger hand with Netanyahu now that he doesn’t have to worry about reelection, but he’s still committed himself rhetorically to preventing an Iranian nuclear weapon. Even if Obama can avert a war, his clear preference, Iran will continue to consume a tremendous amount of the White House and the Pentagon’s attention. The alternative to a massive bombing campaign might not be so benign, either: the point of Stuxnet was to make the Iranians distrust the industrial controls on their nuclear program’s centrifuges.

Then comes Afghanistan, a war that Obama does not discuss candidly. He’s fond of saying, as he did in one of his final ads, that he plans on “ending the war in Afghanistan, so we can do some nation-building here at home.” His real policy is way more complex than that. Yes, Obama is committed to withdrawing most troops and ending a formal U.S. combat role by 2014. Obama plans to keep a residual troop presence in the country, even after the 2014 “withdrawal,” and negotiations with the Afghans about what shape that presence will take — and for what purpose — are supposed to begin shortly. Among the things Obama is likely to seek: Afghanistan’s permission to keep its air bases as launchpads for drone strikes into Pakistan. The charitable interpretation is to say Obama is caveating his out-of-Afghanistan pledge. The uncharitable interpretation is that he’s misleading the country on it.

The Obama administration is still grappling with the implications of its sprawling, robot-led war. Some of its top officials are just starting to question how long the strikes have to persist. But they haven’t addressed concerns about the precedent the U.S. is setting by sending robots to violate the sovereignty of nations, which are unavoidable as drone technology advances and proliferates. Micah Zenko, a scholar at the Council on Foreign Relations, sees a reckoning with the robots on the horizon.

“There is a recognition within the administration that the current trajectory of drone strikes is unsustainable,” Zenko says. “They are opposed in countries where strikes occur and globally, and that opposition could lead to losing host-nation support for current or future drone bases or over-flight rights.” In other words, tomorrow’s America diplomats may find that drones overshadow the routine geopolitical agenda they seek to advance. The trouble is, the administration’s early search for less-lethal policies to supplement or supplant the drones isn’t promising.

Obama’s broader foreign policy agenda keeps getting derailed. He barely talks about his expansive goal of eliminating global nuclear weapons anymore. Any route to an Israeli-Palestinian peace runs through Netanyahu, who only wants to talk about Iran. The much-heralded “pivot” of the U.S. defense posture toward Asia, a relatively modest goal, keeps getting deferred by the crises of the moment: the Navy’s newest and more advanced ships are going to confront Iran, not to preserve the freedom of the Pacific shipping lanes. A former Obama Pentagon official, Rosa Brooks, recently lamented the Obama team’s chronic inability to shape global events.

Civil libertarians rightly point to Obama’s reversals on expanding warrantless surveillance; the indefinite detention of terrorism suspects; military tribunals at Guantanamo Bay; prosecuting whistleblowers; and embracing an expensive definition of the war on terrorism’s executive powers. But there’s little evidence that Obama will change course. In an insightful blog post, the Brookings Institution’s Benjamin Wittes writes that Obama’s civil-liberties and national security record is best explained by a policy “consensus” in D.C., running through George W. Bush’s second term and Obama’s first, that basically agrees on a definition of executive power that civil libertarians dislike. It’s uncomfortable with torture, but basically comfortable with expansive domestic spying and detention powers.

As Obama’s second term dawns, it’s time to put away ideological illusions about his approach to foreign affairs. Liberals keep waiting for an agenda that’s less killer-robot-y. Conservatives are unable to see him as anything but a peacenik: “We’ll get to see what jimmy carter’s 2nd term would have looked like,” tweeted Jim Carafano, a defense analyst at the conservative Heritage Foundation.

But the evidence is staring everyone in the face. Obama has elevated a practice of stealthy robotic warfare to the tactic of choice for U.S. security priorities, and built around it a system that operates it practically on bureaucratic inertia. Obama has a powerful incentive of all to continue his trajectory: with the one major exception of the Benghazi consulate disaster, Obama’s handling of global affairs has been notably free of high-profile screwups. That’s the sort of thing that propels a foreign policy agenda — to borrow a term — forward.