A Message from House of Anonymous 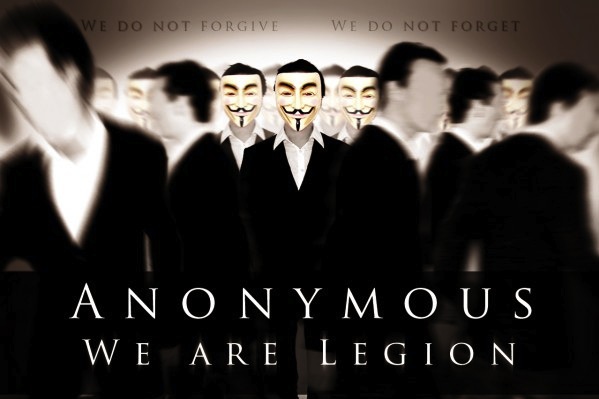 We are Anonymous, and we do not forgive. Forgiveness requires humility, humility requires dignity. We have neither.

We are void of human restraints, such as self respect and common sense.

All those who break this pact will be eliminated without hesitation. And by elimination we will put their name on an icky photo and shit in each others’ mouths.

Those who perform reckless actions or wish to harm the Anonymous will be eliminated without hesitation. Again, elimination is our word for doing very little about it.

Failure is the basis of our existence.

Enemies of the Anonymous include anyone who can point out how many times we contradict ourselves in a single sentence.

Our enemies are to be flaccidly made fun of, using the same tired photoshopped stuff stolen from someone else.

Anonymous must “work” as one. No Anonymous knows anything.

Betrayal of Anonymous is both ironic and appropriate.

Manipulation of the weak and innocent is something that the truly weak believe indicates power, as such we do it alot. Not well but, often. Once a victim is no longer commodious, they are to be eliminated. Also, the cow was slaughtered in the abattoir.

No man-made or natural occurance can harm the Anonymous. Except when Mom and Dad ground us from the computer. That’s pouting time.

Under no circumstances are Anonymous human. We are beneath humans and mortality.

Anonymous are not to partake in meaningless tasks….pffft Ahhh dude I’m totally shitting ya, that’s all we do.

You are legion, for we are many. That makes it easier to defend ourselves when smart people tell us to stop acting like idiots.

Anonymous is everywhere at all times, we like to loiter. we really have nothing better to do than hang out. Yet, singular Anonymous are not permitted to know everything. Which is good, because we know very little.

All have the potential to be Anonymous until they choose to drop a bag of fertilizer on their nutsack and grow a pair. Those who are not Anonymous are to be eliminated….or photoshopped into a nasty photo which ever one requires less standing and walking. Or hack a paypal account and charge PS3’s, send massive amounts of cowardly and empty death threats or, whatever weak ass “criminal” act we think will make us appear powerful.

Anonymous has no weakness or flaw. Well, except maybe getting laid. That ain’t happening. And a whole bunch of others. But besides crippling personality flaws, body odor, lack of humor, not getting laid and relying on shock value and memes to speak for us…we have only a few more flaws and weaknesses.

Laws of Nature and Man cannot restrain the Anonymous. However, an IP ban, power outage or, a light punch to the solar plexus can drop us like a bag of bad habits.

Anonymous is Zero. Feuding and argument amongst the Anonymous is both constant and unavoidable.

Anonymous is in control at all times. We just choose to waste all of it.

Anonymous has no identity. Those who are not Anonymous yet know our presence must be eliminated. Again and, I can not stress this enough people, “eliminate” means sitting on our asses all day pretending to jerk off to Goatse, while our mothers yell at us to get jobs.

Anonymous cannot be contained by mere restraints. We are far too fat to fit any normal conveyance, handcuffs or standard size airline seats.

Anonymous are all equally stupid. No one is more retarded then Anonymous.

Anonymous must obey the Code. Those who do not are to be raped with our mighty e-peens, until supper time and homework, then an hour of Gameboy before bedtime.

Anonymous worships nothing because anonymous is nothing.

Anonymous cares for nothing, but Anonymous. Our existence is vapid, myopic and limited.

Humanity is the virus; Anonymous is the open wound that invites it in.

We are Anonymous, and we do not realize how little we matter.
SOURCE:
http://anoncentral.tumblr.com/post/19748241813/a-message-from-house-of-anonymous