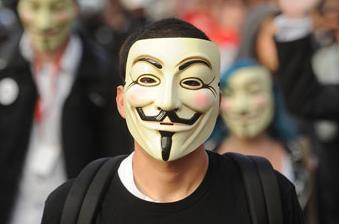 New documentary We Are Legion puts an actual human face on Anonymous, the hacktivist group whose members usually are seen wearing Guy Fawkes masks — if they are seen at all.

Considering Anonymous’ retaliatory acts against websites run by the Department of Justice and the entertainment industry just last week in response to the government takedown of file-sharing site Megaupload, We Are Legion: The Story of the Hacktivists could almost be mistaken for a 93-minute news segment.

But unlike most news segments about the group, the documentary contains genuine moments with actual Anons (some maintain their anonymity in the doc, but others don’t).

“The last two or three days we’ve seen a lot of what Anonymous does,” We Are Legion director Brian Knappenberger said in an interview with Wired.com here Saturday, the morning after the documentary’s premiere at the Slamdance Film Festival. “You know, there was a film about the Weather Underground that came out a few years ago, and that was made 30 years after they were blowing up buildings, and I love that film. But picture making a film like that while they were still blowing up buildings — that’s what I’m talking about.”

We Are Legion might be the first to portray the group’s members as true revolutionaries, and it could serve as a time capsule if the kind of online sit-ins and retaliatory strikes that Anonymous has helped create become the new model for civil disobedience across the globe.

For those who didn’t hear of Anonymous until Occupy Wall Street started up, We Are Legion effectively puts the group’s current incarnation in historical perspective. The documentary traces the roots of early hacker-activist groups like the Cult of the Dead Cow and Electronic Disturbance Theater before jumping into Anonymous’ roots in 4chan.

The documentary goes deep. Speaking with current and former Anonymous participants — as well as Wired writers Ryan Singel and Steven Levy — Knappenberger gives a thorough chronological account of Anonymous’ exploits, up to the group’s current place at the forefront of online disobedience.

Starting with Mercedes Renee Haefer, who was arrested in conjunction with the denial-of-service attacks against online payment service PayPal last July, the documentary talks to Anons and experts about Anonymous’ vendetta against Scientology, defense of WikiLeaks, and support of the actions in Tunisia and Egypt during the Arab Spring.

Slamdance, the underground alternative movie fest that runs during the Sundance Film Festival here each year, seems like the perfect place for We Are Legion’s primer on Anonymous. The film might have seemed out of place at a glitzy Hollywood-in-the-hills screening.

“It feels right,” Knappenberger said of the premiere. “Slamdance has a kind of undercurrent of revolutionary, counterculture, slightly anarchic vibe that just seemed to fit [the film] right away.”

Knappenberger is looking for distribution for his film so it can be seen by a wider audience. It seems possible that Hollywood backers will shy away from a film about Anonymous after the group’s actions against the Motion Picture Association of America and other entertainment industry power players. But Knappenberger said he isn’t worried.

“I just want to tell the story,” he said, adding that considering Anonymous’ various targets over the years, “Who aren’t I offending?”

He could also take advice from his subject Haefer, who in the film says that what Anonymous ultimately hopes to protect is freedom of speech, regardless of a person’s opinions or background.

Or, as she says simply, “Your opinion matters.”