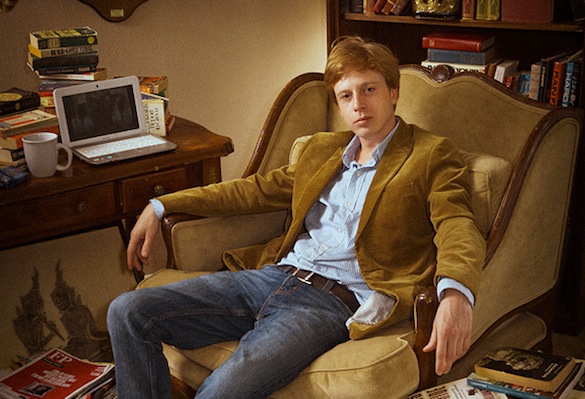 For the second time this year, self-proclaimed Anonymous spokesman Barrett Brown was raided by the FBI.

The latest dramatic incident occurred late Wednesday evening while Brown and another woman identified by some as his girlfriend were participating in an online chat on TinyChat with other individuals.

Two minutes into the recorded chat session, loud voices could be heard in the background of Brown’s residence in Texas while the woman in the room with him was in front of the computer screen. She quickly closed the computer screen, but the audio continued to capture events in the room as the FBI appeared to strong-arm Brown to put handcuffs on him. Brown could be heard yelling in the background.

A spokeswoman in the Dallas County sherriff’s office confirmed to Wired that Brown was raided last night and was booked into the county jail around 11 p.m. She said the FBI removed him from the jail this morning to take him to a different facility, but she did not know where he was headed.

California attorney Jay Leiderman, a member of Brown’s legal team, told Wired that Brown was scheduled to be arraigned today in Texas on making threats to a federal agent.

Asked if the FBI agents were aware that Brown was online at the time of their raid, Leiderman said, “They problaby would have preferred to raid him when he was not online.” He noted that the audio from the raid was “certainly less than flattering when they’re marching through these doors dropping F-bombs…. I imagine they would not want to have that captured if they could help it.”

A voice that appeared to come from one of the arresting agents was heard saying something to the effect: “You’re going down! Get your hands down!”

Right as the noise began, another participant in the chat room showed up in a video window with a white handkerchief covering his lower face. “Is Barrett Browm getting fuckin’ raided by the FBI?” he appeared to say. “Holy shit!”

Brown’s latest raid came after he posted a long and rambling YouTube video in which he talked about taking drugs (though not today, he noted) and about retaliating against an FBI Agent named Robert Smith after he learned that his mother might be hit with obstruction of justice charges. The threat of charges was apparently related to a laptop of Brown’s that he apparently hid.

“So that’s why Robert Smith’s life is over,” Brown said in the video (beginning around minute 9:40). “When I say his life is over, I’m not saying I’m going to kill him, but I am going to ruin his life and look into his fucking kids. Because Aaron Barr did the same thing and he didn’t get raided for it. How do you like them apples?” he said, smiling.

The video, titled “Why I’m Going to Destroy FBI Agent Robert Smith Part Three: Revenge of the Lithe” was accompanied by a note apparently posted by Brown that reads: “Send all info on Agent Robert Smith to [email protected] so FBI can watch me look up his kids. It’s all legal, folks, Palantir chief counsel Matt Long already signed off on it when Themis planned worse.”

Brown also talked about being a target of the Zeta drug cartel and mentioned that he was heavily armed and was concerned that the cartel would come after him posed as federal officers.

“Any armed official of the U.S. government, particularly the FBI, will be regarded as potential Zeta assassin squads,” he said in the video. “As FBI knows … they know that I’m armed and I come from a military family and I was taught to shoot by a Vietnam veteran … and I will shoot all of them and kill them if they come and do anything…. I have reason to fear for my life.”

He signed off the video saying: “Frankly, it was pretty obvious I was going to be dead before I was 40 or so, so I wouldn’t mind going out with two FBI sidearms like a fucking Egyptian pharaoh. Adios.”

Asked about Brown’s comments, Leiderman said that he hadn’t seen the full video and wasn’t aware of everything Brown had said, but he noted that his client had a reputation for hyperbole and joking around, and that things he said might appear to be a threat when they weren’t really intended to be that way.

“It’s hard to understand the context [of what he said], Leiderman said. “But this is speech, so ordinarily we go to a First Amendment defense, but obviously there are lines that can be crossed where you can lose your First Amendment protection.”

An FBI spokeswoman had no comment to make on Brown’s arrest.

The Fight for @YourAnonNews and the Missing $35,000