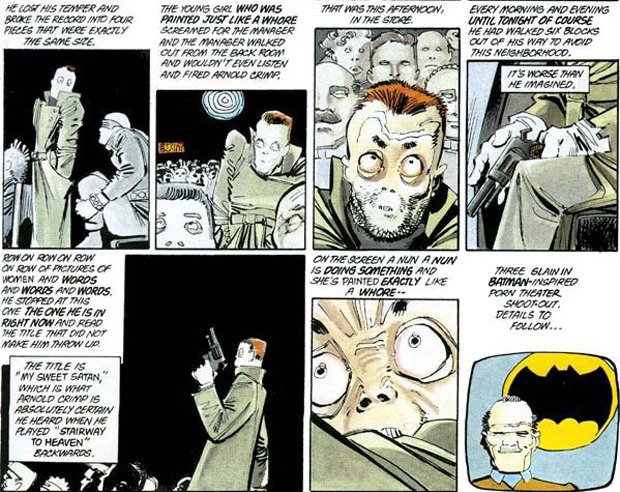 Here we go again. There’s going to be a lot of speculation regarding this Batman movie shooting. It fits too perfectly into their gun control agenda build up of late for it not to be staged but we’ll have to see. But already we’re seeing the same pattern of foreshadowing and predictive programming.

If you want a real hint, this report just showed up in the Washington Times of all things. They’re of course insinuating it was possibly the inspiration for the shooter. We’ll be learning more about him quickly but from his disturbed profile he sure seems to fit the usual mind control pattern.

What is strange is how prevalent this comic-type illustration predictive propaganda is with these false flag events.

The horrific shooting at the screening of The Dark Knight Rises in Colorado late last night bears eerie similarities to a scene in the 1986 comic Batman: The Dark Knight Returns. In the comic, a crazed, gun-toting loner walks into a movie theater and begins shooting it up, killing three in the process. The passage concludes with the media blaming Batman for inspiring the shooting, though he is not involved in the incident at all.

The 1986 comic, written and drawn by Frank Miller, was a key inspiration for the Chris Nolan Batman films. It helped to reimagine the character away from his Saturday morning cartoon image and into a dark, grim avenger. The point of this particular scene in the comic was to show just how far Gotham has fallen since Batman had retired.  Source

The Illuminati card game was invented way before any of the above depicted events. A strange phenomenon indeed. We don’t know what is behind these incredibly prescient depictions but it isn’t the only instance of these kinds of illustrations, apparently done or or inspired by insiders. (This is just a sampling, there are many more cards, a very interesting study.)

In 1990 an Illuminati Card Game was invented by Steven Jackson. The ’game’ he had created ruffled quite a few feathers as he was promptly visited by the Secret Service who tried to shut him down and prevent the cards from being released. You can read Jacksons own account of the raid Here.

Apparently Jackson must have either had some type of insider knowledge or the foresight of Nostrodumus because the game he created has turned out to be very close to the real thing. Several of the cards depict events in modern history that either have, or soon will occur, including the attacks on the World Trade Center and Pentagon. Source