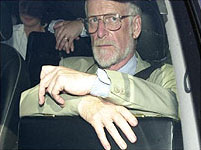 David Kelly, age 59, died on July 18, 2003. British biological weapons expert, was said to have slashed his own wrists while walking near his home. Kelly was the Ministry of Defense’s chief scientific officer and senior adviser to the proliferation and arms control secretariat, and to the Foreign Office’s non-proliferation department. The senior adviser on biological weapons to the UN biological weapons inspections teams (Unscom) from 1994 to 1999, he was also, in the opinion of his peers, pre-eminent in his field, not only in this country, but in the world.