DRONES: Everything You Need To Know About Small UAVs to Hunter Killer Skynet Robots 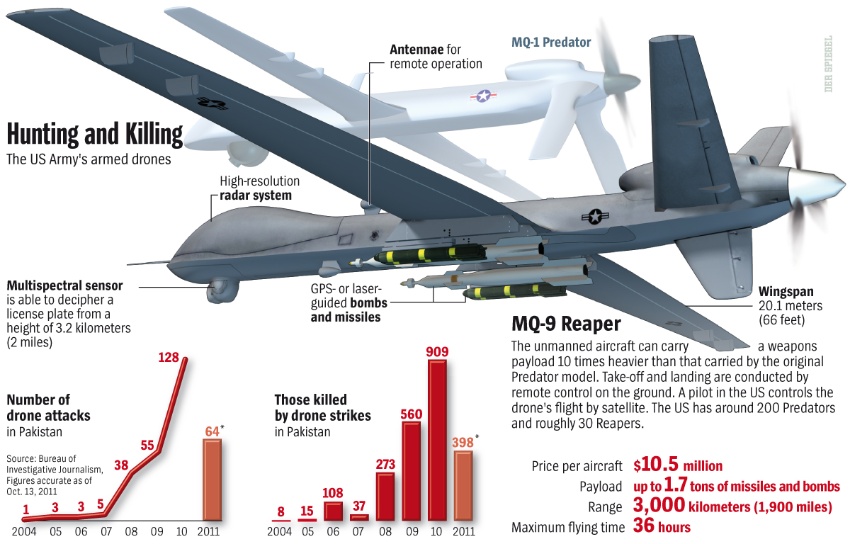 WHO  IS DEVELOPING THESE THINGS?  WHO IS TESTING THEM?  WHO IS KILLING INNOCENT CIVILIANS ANONYMOUSLY WITH THEM?

[1] Class 2 and 3 drones only.  Small/Micro/Mini drones not included. Also does not include large drones in service with police, border patrol, National Guard or CIA.  Given secretive nature of military list is almost certainly not complete.

[3] Euro Hawk, based on Global Hawk is just coming into service.  German has ordered five.

Many more are required to plan, oversee and debrief a drone-directed attack by multiple gunships. Civilian contractors are often on-site participants.

An excellent 2,200-page investigative report of drone-directed attack on civilians was published by CENTCOM which describes staffing and procedures of a drone-attack operation:

A Pakistani student is unable to accept his film festival award because he is denied the right to enter the U.S.

That the U.S. is routinely killing innocent civilians in multiple Muslim countries is one of the great taboos in establishment media discourse. A film that documents the horrors and Terror brought by the U.S. to innocent people — and the way in which that behavior constantly strengthens the Terrorists, thus eternally perpetuating its own justification — threatens to subvert that taboo. So this filmmaker is simply kept out of the country, in Pakistan, where he can do little harm to U.S. propaganda (as usual, U.S. government claims of secrecy based on national security are primarily geared toward ensuring effective propagnada — of the American citizenry). Isn’t it time for another Hillary Clinton lecture to the world on the need for openness and transparency? “Those societies that believe they can be closed to change, to ideas, cultures, and beliefs that are different from theirs, will find quickly that in our internet world they will be left behind,” she so inspirationally intoned last month. – Glenn Greenwald

Drones: As military Use Expands, Civil Use Being Developed

Just a few days after a senior US counter-terrorism expert warned  that US drone strikes were turning Yemen into the “Arabian equivalent of Waziristan”, US drone strikes yesterday aped the tactic of ‘follow up’ strikes used by the US in Pakistan.

According to CNN, a strike in which seven  suspected Al-Qaeda militants were killed was followed by a strike on local residents rushing to the scene to help the injured.  Local sources said that between eight and twelve civilians were killed in the second, follow-up strike.  A Yemeni security officials expressed regret for the civilian casualties and injuries. “The targets of the raids were not the civilians, and we give our condolences to the families of those who lost a loved one.”

Over the past few weeks US drone strikes and other military activity has been ratcheted up in Yemen as the White House has given ‘greater leeway’ to the CIA and JSOC to launch attacks.  Micah Zenko at the US Council on Foreign Relations estimates there will be more US strikes this month in Yemen than there has ever been in a single month in Pakistan.  For details see the Bureau of Investigative Journalism’s excellent database of US covert activity in Yemen.

Drone strikes continue in Pakistan of course and no doubt in Afghanistan although almost no details of these are released.  Last week the US apologised after a strike killed a mother and her five children in Afghanistan but it was not revealed if the strikes was from a drone or a manned aircraft.

Drone fatalities continue to spread around the globe.  As we reported last year, US drones from Iraq were moved to Turkey to help the Turkish military “monitor” Kurdish separatists.  Today (16 May) it was revealed by the Wall Street Journal that information from one of these drones led directly to a Turkish military attack in which 38 civilians were killed last December.   Last week an engineer  working for an Austrian company was killed and two others injured when a drone they were demonstrating to the South Korean military crashed.

Meanwhile preparations aimed at  enabling the use of unmanned drones to fly  in civil airspace continues at a brisk pace both in the US and the UK.

Yesterday the US Federal Aviation Administration (FAA) announced that it had met the deadline for the first changes demanded by the new FAA Act aimed at allowing drones to fly in US civil airspace by September 2015.  The Act mandated that the FAA must streamline the process for government agencies to gain Certificates of Authorization (COA) to fly drones  within US civil airspace within 90 days.

Meanwhile in the UK BAE Systems has begun a series of flight tests over the Irish Sea as part of a programme aimed at allowing  unmanned drones to fly within UK civil airspace. BAE Systems is one of a number of military aerospace companies funding the ASTRAEA (Autonomous Systems Technology Related Airborne Evaluation & Assessment) programme.  According to the  ASTRAEA website it is “a UK industry-led consortium focusing on the technologies, systems, facilities, procedures and regulations that will allow autonomous vehicles to operate safely and routinely in civil airspace over the United Kingdom.”

According to The Engineer, BAE has fitted an “autonomous navigation system” on a Jetstream 31 passenger aircraft to enable it to fly without a pilot – although a pilot was on board in case of problems.

A BAE spokesperson told the Guardian that the tests “will demonstrate to regulators such as the Civil Aviation Authority and air traffic control service providers the progress made towards achieving safe routine use of UAVs [unmanned air vehicle] in UK airspace.”  Further flights  will take place over the next three months  testing infra-red systems as well as ‘sense-and-avoid’ systems.

When the 2012 national Know Drones Tour comes to Baltimore on Thursday, May 3, it will challenge Congressperson C.A. “Dutch” Ruppersberger, a member of the House Unmanned Systems (Drone) Caucus, to reallocate $190,000 in campaign contributions[1] that he has received from drone makers and related businesses to benefit children in US drone strike zones and to the Baltimore City Schools.

“The Congress has done no effective oversight of US drone warfare and has opened US skies to drones carrying weapons and to drone surveillance of the US public,” said Nick Mottern, director of the Know Drones Tour.  “Congressman Ruppersberger, as a member of the House Armed Services Committee and the House Permanent Committee on Intelligence, has direct responsibilities related to drone war and drone surveillance,” Mottern continued, “and he can avoid any appearance of conflict of interest by sending his drone industry campaign contributions to kids who are being harmed by the US infatuation with drones and by resigning from the drone caucus, a lobbying group for the drone industry within the Congress.”

Max Obuszewski, a long-time advocate for peace and justice made this observation: “It is shocking that the Obama administration has used drone strikes to murder U.S. citizens.  This horrible affront to due process suggests that the Bill of Rights is being shredded.”

The tour, endorsed by Baltimore Pledge of Resistance, the National Campaign for Nonviolent Resistance, Code Pink, War Resisters League and others (below), uses 8’ long replicas of the MQ-9 Reaper drone to do sidewalk education on the legal, ethical and civil liberties concerns raised by the surge in US drone warfare and drone surveillance.