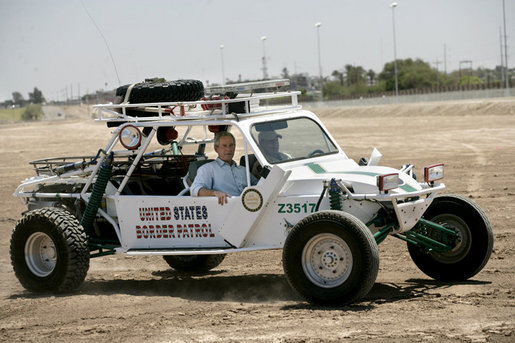 Under the guise of environmentalism, various federal agencies and departments are blocking Border Patrol agents’ access to critical areas while contributing to widespread lawlessness along the U.S. border, according to experts. Criminals, meanwhile, are taking full advantage of the rapidly deteriorating situation.

Despite claims by the Obama administration that the American border is “safer” or “more secure” than ever, sources with knowledge of the reality on the ground say that is simply not true. In fact, as Mexico spirals deeper into chaos, conditions along the border are only getting worse — rapidly.

“Far from contained and secure, the Arizona Border remains a terribly dangerous sieve from which not only illegals enter America, but drug cartels operating as organized crime syndicates and even as terrorist cells are coming to and from across America’s supposed secure border,” noted private-sector intelligence analyst and border expert Lyle Rapacki with Sentinel Intelligence Services in an e-mailed briefing obtained by The New American.

And according to experts, the federal government itself is a major contributor to the problem. Its public-lands policies, for example, have essentially created vast “no-go” zones where the Border Patrol is barred from meaningful operations while criminals and traffickers run wild.

“Federal agencies are using environmental laws to keep agents from having unfettered access to the border and to pursue criminals on federal public land once the criminals have crossed,” Vice Chairman Zack Taylor of the National Association of Former Border Patrol Officers (NAFBPO — symbolic badge shown above) told The New American. “The criminals have destroyed the federal public land and it makes no sense to keep Border Patrol off because it simply causes more damage.”

According to Taylor and other experts, the Department of Interior and the Department of Agriculture are the main culprits responsible for creating the dangerous situation. “It is a ploy of the open borders advocates to keep Border Patrol out and let the illegal aliens and drugs in,” he explained. “They are using the environmental protection laws to do that. That simple.”

And by restricting Border Patrol access to huge areas of public land — from Arizona and New Mexico to Montana and Idaho — the federal government is giving criminals the advantage. And they are using it to wreak havoc within America.

“If the agents cannot access the border area, they cannot patrol it,” Taylor noted. “The criminals then have an advantage and make good use of the advantage by smuggling drugs and aliens into the United States.”

Taylor said criminals occupy and monitor the vast off-limits areas to increase the chances of success in their smuggling operations. In some cases, traffickers’ networks of surveillance and communication can keep a constant view of corridors stretching from the Mexican border to Phoenix, he explained. And that makes bringing in drugs, illegal immigrants, and terrorists much simpler.

Of course, it is not just border states that are threatened. Hundreds of American cities now have active foreign-based criminal networks that operate with impunity. And very little is being done to stop it, experts say.

The press, meanwhile, has largely remained silent. “It is as if the administration has placed a gag order on them,” Taylor said. “They just won’t talk about it, much less report it.”

The state of Arizona has attempted to adopt some measures aimed at protecting citizens, but the Obama administration has responded with lawsuits and harassment. Lawmakers in the state, however, know that something must be done.

“Arizona is losing control of her sovereign land,” noted State Senator Sylvia Allen, chairman of the Arizona Senate Committee on Border Security. “Arizona is in a State of Emergency. If we want to protect our national and state sovereignty, we must secure our border and enforce our laws.”

Sen. Allen’s committee has heard testimony from citizens along the border area who reported home invasions, vandalism, theft, and a host of other criminal activities. Clearly, the state is facing a monumental crisis that needs to be addressed, she said. Yet, instead of helping, the federal government is making matters worse, according to a statement issued by Sen. Allen late last year. And the problems created by the executive branch are hardly isolated incidents.

“Why is the apparent official policy of the United States to ridicule and silence those who are trying to protect our state of Arizona? Why are the cartels protected?” she wondered. “Why do official U.S. government departments, sworn to protect American citizens, extend protection to gangs working with the drug cartels, and even to terrorists entering our nation from various border entry points?”

Sen. Allen and numerous other experts believe they know the answer — or at least part of it. The disastrous federal border policies, according to Allen, are connected to the emerging “North American Union” — a plan to essentially “merge” the United States with Mexico and Canada that is regularly and openly discussed by top officials including former Mexican President Vicente Fox, who told CNN that the merger is “inevitable.”

“There is a concerted, deliberate, and sophisticated program under way to erase our national boundaries and create a North American Union,” Sen. Allen explained. “The gift of sovereignty handed to us by our Forefathers would be extinguished, and we would become subjects, no longer free.”

Other critics of U.S. policies have noted the futility — insanity, perhaps — of fighting a multi-trillion-dollar terror war around the world and using the armed forces to secure land borders in Asia even as America’s own borders remain wide open for potential terrorists. Homeland Security, meanwhile, has been too busy hyping the threat of “right-wing extremism” to properly control the border. And the apparent lunacy does not end there.

The federal government is also shoveling billions of American tax dollars into the coffers of corrupt Latin American governments — purportedly to fight the “drug war” — even as narcotics flow virtually unhindered across wide swaths of the U.S. border. And if recent reports and statements by experts are to be believed, the problem goes even deeper than that.

The Obama administration is currently being investigated by Congress for trafficking thousands of high-powered weapons to Mexican drug cartels under Operation Fast and Furious. Some of those guns were later tied to the murder of Border Patrol agent Brian Terry.

Meanwhile, lawmakers are also probing the administration’s money laundering activities through the DEA after a front page story in the New York Times exposed the scheme. According to sources and reports, the federal government may even be directly involved in fomenting the chaos south of the border: More than a few drug kingpins and some American officials have even said the U.S. government was purposefully providing weapons and protection to the criminal empires.

Another controversial policy that experts say is related to the overall plan is the President’s effort to provide covert “amnesty” for millions of illegal immigrants without even obtaining approval from Congress. “We have been betrayed by our leaders in a way that I just did not think was possible,” NAFBPO [National Association of Former Border Patrol Officers] Chairman and former Assistant Chief Patrol Agent Kent Lundgren explained in an exclusive interview with the Liberty News Network.

Critics of the policies — including lawmakers nationwide, NAFBPO, and countless other concerned groups — believe it is past time to rein in the administration and put an end to the lawlessness. But as Mexico descends into a bloody civil war that is seeping across the border, the time for action may be running out.

Escalating Chaos on Our Border

War on the Border Patrol

Holder Admits Lies in Fast and Furious, Refuses to Resign

Rumsfeld Documentary Reveals What an Unaccountable Slippery Bastard He Is