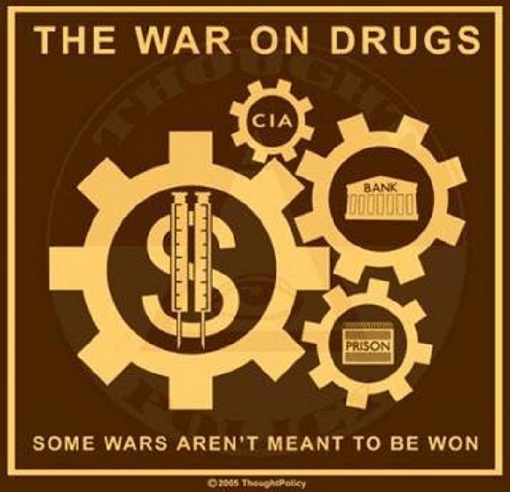 What keeps the drug industry going is its huge profit margins. Processed cocaine is available in Colombia for $1500 dollars per kilo and sold on the streets of America for as much as $66,000 a kilo (retail). Heroin costs $2,600/kilo in Pakistan, but can be sold on the streets of America for $130,000/kilo (retail).
Drugs and Guns are the two most profitable industries in the world, so as long as we operate under the same rules of capitalism and materialism like we have been for so many years, nothing can or will ever change the status quo.
If the Illicit Drug Industry is the second largest industry in the world, the Anti-Drug Industry, or DEA, is the next largest. It is sometimes difficult to distinguish where one ends and the other begins.

“In my 30 year history in DEA, the major targets of my investigations almost invariably turned out to be working for the CIA.” – Dennis Dayle, Chief of an elite DEA unit in Central America.

The CIA has control of the global drug trade. Just as the British Empire was in part financed by their control of the opium trade through the British East India Company, so too has the CIA been found time after time to be at the heart of the modern international drug trade. From its very inception, the CIA has been embroiled in the murky underworld of drug trafficking.
There are billions of dollars per year to be made in keeping the drug trade going, and it has long been established that Wall Street and the major American banks rely on drug money as a ready source of liquid capital. With those kinds of funds at stake, it is unsurprising to see a media-government-banking nexus develop around the status quo of a never-ending war on drugs – aided, abetted and facilitated by the modern-day British East India Company, the CIA.

The CIA has been involved in drug trafficking long before former President George H.W. Bush served as the CIA Director, but it was while he was in charge that CIA drug trafficking was first exposed and 47 members the Reagan Staff were convicted and imprisoned.

This is our EyeOpener Report by James Corbett presenting the history, documented facts, and cases on the CIA’s involvement and operations in the underworld of drug trafficking, from the Corsican Mafia in the 1940s through the 1980s Contras to the recent Zambada Niebla Case today.
Now it’s not just the United States being bombarded with drugs. Today Russia, the CIS Countries (the Commonwealth of Independent States is a regional organization whose participating countries are former Soviet Republics, formed during the breakup of the Soviet Union) and all of Europe are under covert assault by the CIA, Mossad, and Drugs Inc.
It appears that the cold war has gone into a new and deadly direction. Currently Russia, the CIS countries as well as the rest of Europe are suffering from a new drug epidemic from the vast quantities of cheap, high quality heroin from Afghanistan. Since the US occupation, the Opium production in Afghanistan has increased one hundred thousand fold.
It is well documented that US soldiers and private contractors are both protecting the poppy fields and safeguarding the cultivation. And with the occupation of Afghanistan, the US controls the source of this cheap high quality heroin, managed by the CIA, being is responsible for this plague upon the people of the Eastern Asia and Europe, not to mention the vast quantities of the drug which make it back to the United States.
To see how the CIA organizes the international drug trade, we must only look as far as former CIA officer, John Millis, who served for thirteen years as a case officer supplying covert CIA aid to the heroin-trafficking guerrillas in AfghanistanÑan analogous and contemporary alliance between the CIA and known drug-traffickers (New York Times, 6/6/00). At least one of the airlines involved in the Afghan support operation, Global International Airways, was also named in connection with the Iran-Contra scandal (Los Angeles Times, 2/20/97).
During the same time as the Contras, the CIA was arming and advising heroin-trafficking guerrillas in Afghanistan. Its leader, Gulbuddin Hekmatyar, became one of the leading heroin suppliers of the world. During the last few years, the CIA has helped promote the KLA (Kosovo Liberation Army), whose leaders and arms had been financed by Kosovar drug-traffickers. Indeed, the CIA’s practice of recruiting drug-financed armies is an on-going, never-ending affair. Using Laotians, whose sole cash crop was opium, the CIA recruited an army numbering in the tens of thousands.
It is easy to see how these practices by the CIA have greatly contributed to the drug crisis worldwide, including the United States. When the first established contact was made with heroin-trafficking Afghan guerrillas in 1979, no Afghan-Pakistan heroin was known to have ever reached the United States. By 1984, according to the Reagan Administration, 54 percent of the heroin reaching this country came from the Afghan-Pakistan border. Today, it is estimated that well over 90% of the world’s heroin comes from Afghanistan!
In a typical year, Afghan farmers sell around 7,000 tons of opium, which converts into around 1,000 tons of heroin. That comes out to roughly $900 million in annual revenues for the farmers, $1.6 billion for the local traffickers within Afghanistan, and another $1.5 billion for those who smuggle heroin out of the country. You do the math.
The CIA is more or less responsible for providing the contacts, protection, transportation and required chemicals to process raw opium into heroin. Without these elements the whole multi-billion dollar operation would not be possible. Again, you do the math.
The United States Department of Agriculture is even providing agricultural advice (at US taxpayer expense), to increase the yield per acre of opium poppies. The USA is sponsoring this chemical attack upon the Russian people and their allies.
Of course, the Afghanistan heroin operation is just one of many CIA dug trafficking fronts. The same thing they are doing there with heroin they are doing in Columbia, Chile and Peru with cocaine and in Mexico, Central and South America with Marijuana (read my article, The Great American Marijuana Conspiracy and/or get The Emperor Wears no Clothes FREE marijuana conspiracy ebook, just for signing up for the FREE Conspiracy Watch Newsletter).
The proceeds of CIA drug sales now buys elected officials, judges and entire police departments and law enforcement agencies around the globe. The corruption goes from the US and Mexico, to Europe, Eurasia and even Southeast Asia. Wherever people have power, the CIA will buy them and their influence.
The US government has no desire to stop the drug epidemic in America, much less anywhere else, as too many American politicians and businessmen are getting very wealthy from both domestic and international illegal drug problems.
I will be bringing you more on the phony War on Drugs, here on Conspiracy Watch, as I continue to track government conspirators across the globe.

For now, I would appreciate your feedback, as you let Conspiracy Watch readers know how you feel about The War on Drugs and our government official’s involvement in keeping millions of people addicted or locked up for their own profit.