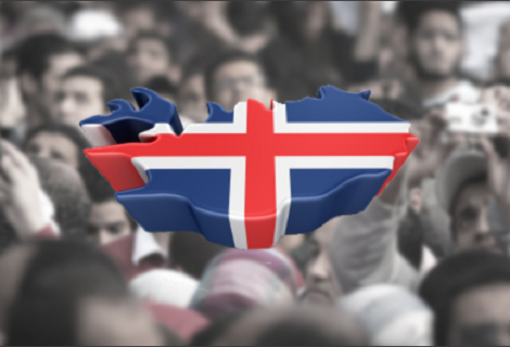 In Iceland, it’s truly power to the people.

The Nordic country announced Tuesday that two-thirds of voters are backing a draft constitution based on comments from social media.

Iceland is creating a new, crowdsourced constitution in the wake of the country’s banking crisis and citizen protests, and government officials garnered feedback from users on Facebook, Twitter, YouTube, and Flickr to shape it.

The document, which went up for a non-binding vote on Saturday, was created by a panel of 25 citizens who compiled 3,600 comments and 370 suggestions from social media over the past year. Six questions appeared on the referendum, and the first two asked whether Icelanders want to adopt the user-generated constitution.

Nearly half of Iceland’s 235,000 eligible voters took part in the referendum, with 66 percent of those voting in favor. GigaOM said it makes sense that the Internet-backed option would have the most support.

“Give the people a chance to feed into the drafting, taking advantage of the internet’s convenience and low barriers, and they’ll stand behind the result,” wrote GigaOM’s David Meyer in a detailed analysis of the results.

Although the parliament is ultimately responsible for ratifying a new constitution, supporters hope the two thirds-backed constitution will be hard to ignore.

“This is a very clear conclusion for parliament,” said Thorolfur Matthiasson, an economist at the University of Iceland, to Reuters. “The majority of voters want changes in all the topics asked about in the vote.”

One of the major topics up for discussion was giving the government greater control of natural resources, including fish and geothermal energy, which are currently controlled by a handful of the island’s wealthy “sea baron” families.

It’s estimated that 320,000 Icelanders—two-thirds of Iceland’s population—are on Facebook, which was used to broadcast the 25-member panel’s weekly meetings. The gatherings aired live on Facebook so interested citizens could offer suggestions and debate along with the panel.

Parliament now has to decide if they want to turn the crowdsourced constitution into a reality. Whether they settle on this document, or a different one, something must be finalized prior to next spring’s elections.