List Of Top 10 Stories Underreported By The Mainstream Media 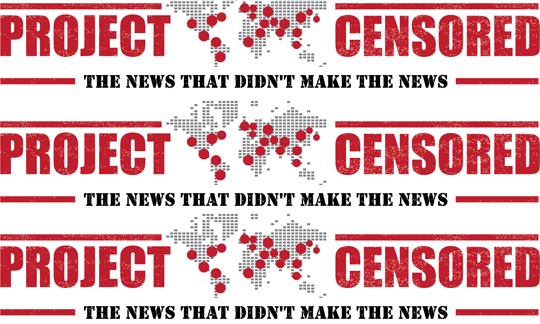 “The restructuring of media in the United States is creating forms of censorship that are as potentially damaging as overt censorship.”

“Media corporations have been undergoing a massive merging process that is realigning our sources of information in America,”

The 11 largest or most influential media corporations in the United States – General Electric Company (NBC), Viacom Inc. (cable), The Walt Disney Company (ABC), Time Warner Inc.(CNN), Westinghouse Electric Corporation (CBS), The News Corporation Ltd. (Fox), Gannett Co. Inc., Knight-Ridder Inc., New York Times Co., Washington Post Co. and the Times Mirror Co. – represent the interests of corporate America, and that the media elite are the watchdogs of acceptable ideological messages, the parameters of news and information content and the general use of media resources. Your Mainstream Media is manipulating the news you are allowed to see.

Project Censored has been documenting inadequate media coverage of crucial stories since it began in 1967 at Sonoma State University.

Each year, the group considers hundreds of news stories submitted by readers, evaluating their merits. Students search Lexis Nexis and other databases to see if the stories were underreported, and if so, the stories are fact-checked by professors and experts in relevant fields.

.” Project Censored Director Mickey Huff told us the idea was to show how various undercovered stories fit together into an alternative narrative, not to say that one story was more censored than another.

1. Signs of an emerging police state

President George W. Bush is remembered largely for his role in curbing civil liberties in the name of his “war on terror.” But it’s President Obama who signed the 2012 NDAA, including its clause allowing for indefinite detention without trial for terrorism suspects.

Another law of concern is the National Defense Resources Preparedness Executive Order that Obama issued in March 2012. That order authorizes the president, “in the event of a potential threat to the security of the United States, to take actions necessary to ensure the availability of adequate resources and production capability, including services and critical technology, for national defense requirements.”

The president is to be advised on this course of action by “the National Security Council and Homeland Security Council, in conjunction with the National Economic Council.” Journalist Chris Hedges, along with co-plaintiffs including Noam Chomsky and Daniel Ellsberg, won a case challenging the NDAA’s indefinite detention clause on Sept. 1, when a federal judge blocked its enforcement, but her ruling was overturned on Oct. 3, so the clause is back.

People who get their information exclusively from Mainstream Media sources may be surprised at the lack of enthusiasm on the left for President Barack Obama in this crucial election.

But that’s probably because they weren’t exposed to the full online furor sparked by Obama’s continuation of his predecessor’s (George Bush) overreaching approach to national security, such as Obama signing the 2012 National Defense Authorization Act, which allows the indefinite detention of those accused of supporting terrorism, even U.S. citizens.

Big banks aren’t the only entities that our country has deemed “too big to fail.” But our oceans won’t be getting a bailout anytime soon, and their collapse could compromise life itself. In a haunting article highlighted by Project Censored, Mother Jones reporter Julia Whitty paints a tenuous seascape — overfished, acidified, warming — and describes how the destruction of the ocean’s complex ecosystems jeopardizes the entire planet, not just the 70 percent that is water.

Whitty compares ocean acidification, caused by global warming, to acidification that was one of the causes of the “Great Dying,” a mass extinction 252 million years ago.

Life on Earth took 30 million years to recover. In a more hopeful story, a study of 14 protected and 18 non-protected ecosystems in the Mediterranean Sea showed dangerous levels of biomass depletion.

But it also showed that the marine reserves were well-enforced, with five to 10 times larger fish populations than in unprotected areas. This encourages establishment and maintenance of more reserves.

A plume of toxic fallout floated to the U.S. after Japan’s tragic Fukushima nuclear disaster on March 11, 2011. The U.S. Environmental Protection Agency found radiation levels in air, water and milk that were hundreds of times higher than normal across the United States.

One month later, the EPA announced that radiation levels had declined, and they would cease testing. But after making a Freedom of Information Act request, journalist Lucas Hixson published emails revealing that on March 24, 2011, the task of collecting nuclear data had been handed off from the U.S. Nuclear Regulatory Commission to the Nuclear Energy Institute, a nuclear industry lobbying group.

And in one study that got little attention, scientists Joseph Mangano and Jeanette Sherman found that in the period following the Fukushima meltdowns, 14,000 more deaths than average were reported in the U.S., mostly among infants. Later, Mangono and Sherman updated the number to 22,000.

We know that FBI agents go into communities such as mosques, both undercover and in the guise of building relationships, quietly gathering information about individuals.

This is part of an approach to finding what the FBI now considers the most likely kind of terrorists, “lone wolves.” Its strategy: “seeking to identify those disgruntled few who might participate in a plot given the means and the opportunity. And then, in case after case, the government provides the plot, the means, and the opportunity,” writes Mother Jones journalist Trevor Aaronsen.

The publication, along with the Investigative Reporting Program at the University of California-Berkeley, examined the results of this strategy, 508 cases classified as terrorism-related that have come before the U.S. Department of Justice since the 9/11 terrorist attacks of 2001. In 243 of these cases, an informant was involved; in 49 cases, an informant actually led the plot.

And “with three exceptions, all of the high-profile domestic terror plots of the last decade were actually FBI stings.” facilitated by the F.B.I., whose undercover agents and informers posed as terrorists offering a dummy missile, fake C-4 explosives, a disarmed suicide vest and rudimentary training. Suspects naïvely played their parts until they were arrested.

The Federal Reserve, the U.S.’s quasi-private central bank, was audited for the first time in its history this year. The audit report states, “From late 2007 through mid-2010, Reserve Banks provided more than a trillion dollars … in emergency loans to the financial sector to address strains in credit markets and to avert failures of individual institutions believed to be a threat to the stability of the financial system.” These loans had significantly less interest and fewer conditions than the high-profile TARP bailouts, and were rife with conflicts of interest. Some examples: the CEO of JP Morgan Chase served as a board member of the New York Federal Reserve at the same time that his bank received more than $390 billion in financial assistance from the Fed. William Dudley, who is now the New York Federal Reserve president, was granted a conflict of interest waiver to let him keep investments in AIG and General Electric at the same time the companies were given bailout funds. The audit was restricted to Federal Reserve lending during the financial crisis. On July 25, 2012, a bill to audit the Fed again, with fewer limitations, authored by Rep. Ron Paul, passed the House of Representatives. H.R. 459 was expected to die in the Senate, but the movement behind Paul and his calls to hold the Fed accountable, or abolish it altogether, seem to be growing.

Reporting on a study by researchers from the Swiss Federal Institute in Zurich didn’t make the rounds nearly enough, according to Censored 2013. They found that, of 43,060 transnational companies, 147 control 40 percent of total global wealth. The researchers also built a model visually demonstrating how the connections between companies — what it calls the “super entity” — works. Some have criticized the study, saying control of assets doesn’t equate to ownership. True, but as we clearly saw in the 2008 financial collapse, corporations are capable of mismanaging assets in their control to the detriment of their actual owners. And a largely unregulated super entity like this is vulnerable to global collapse.

7. The International Year of Cooperative

Can something really be censored when it’s straight from the United Nations? According to Project Censored evaluators, the corporate media underreported the U.N. declaring 2012 to be the International Year of the Cooperative, based on the co-op business model’s stunning growth. The U.N. found that, in 2012, 1 billion people worldwide are co-op member-owners, or one in five adults over age 15. The largest is Spain’s Mondragon Corporation, with more than 80,000 member-owners. The U.N. predicts that by 2025, worker-owned co-ops will be the world’s fastest growing business model. Worker-owned cooperatives provide for equitable distribution of wealth, genuine connection to the workplace, and, just maybe, a brighter future for our planet.

In January 2012, the BBC “revealed” how British Special Forces agents joined and “blended in” with rebels in Libya to help topple dictator Muammar Gadaffi, a story that alternative media sources had reported a year earlier. NATO admits to bombing a pipe factory in the Libyan city of Brega that was key to the water supply system that brought tap water to 70 percent of Libyans, saying that Gadaffi was storing weapons in the factory. In Censored 2013, writer James F. Tracy makes the point that historical relations between the U.S. and Libya were left out of mainstream news coverage of the NATO campaign; “background knowledge and historical context confirming Al-Qaeda and Western involvement in the destabilization of the Gadaffi regime are also essential for making sense of corporate news narratives depicting the Libyan operation as a popular ‘uprising.’”

On its website, the UNICOR manufacturing corporation proudly proclaims that its products are “made in America.” That’s true, but they’re made in places in the U.S. where labor laws don’t apply, with workers often paid just 23 cents an hour to be exposed to toxic materials with no legal recourse. These places are U.S. prisons. Slavery conditions in prisons aren’t exactly news.

It’s literally written into the Constitution; the 13th Amendment, which abolished slavery, outlaws “slavery nor involuntary servitude, except as a punishment for crime whereof the party shall have been duly convicted.” But the articles highlighted by Project Censored this year reveal the current state of prison slavery industries, and its ties to war.

The majority of products manufactured by inmates are contracted to the Department of Defense. Inmates make complex parts for missile systems, battleship anti-aircraft guns and landmine sweepers, as well as night-vision goggles, body army and camouflage uniforms.

Of course, this is happening in the context of record high imprisonment in the U.S., where grossly disproportionate numbers of African Americans and Latinos are imprisoned, and can’t vote even after they’re freed. As psychologist Elliot D. Cohen puts it in this year’s book: “This system of slavery, like that which existed in this country before the Civil War, is also racist, as more than 60 percent of U.S. prisoners are people of color.”

H.R. 347, sometimes called the “criminalizing protest” or “anti-Occupy” bill, made some headlines. But concerned lawyers and other citizens worry that it could have disastrous effects for the First Amendment right to protest. Officially called the Federal Restricted Grounds Improvement Act, the law makes it a felony to “knowingly” enter a zone restricted under the law, or engage in “disorderly or disruptive” conduct in or near the zones.

The restricted zones include anywhere the Secret Service may be — places such as the White House, areas hosting events deemed “National Special Security Events,” or anywhere visited by the president, vice president and their immediate families; former presidents, vice presidents and certain family members; certain foreign dignitaries; major presidential and vice presidential candidates (within 120 days of an election); and other individuals as designated by a presidential executive order.

These people could be anywhere, and NSSEs have notoriously included the Democratic and Republican National Conventions, Super Bowls and the Academy Awards. So far, it seems the only time H.R. 347 has kicked in is with George Clooney’s high-profile arrest outside the Sudanese embassy.

Clooney ultimately was not detained without trial — information that would be almost impossible to censor — but what about the rest of us who exist outside of the mainstream media’s spotlight?