Mitt Romney: An Agent of The State of Israel 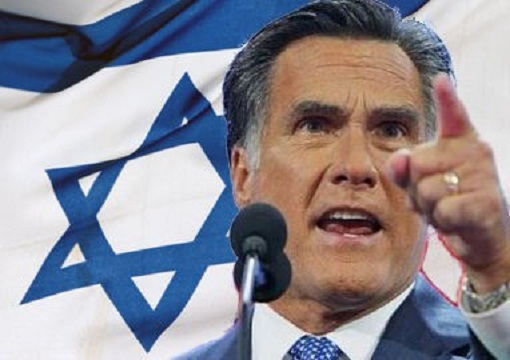 Orit Gadiesh, former “War Room” assistant to Ezer Weizman and Moshe Dayan, is the daughter of Israeli Brigadier General Falk Gadiesh (born Falk Gruenfeld, Berlin, 1921) and his Ukrainian-born wife. Gadiesh is chairman of the management consulting firm Bain & Company, the parent company of Bain Capital, and was the company’s managing director under CEO Mitt Romney in 1992. “She’s like a Jewish mother figure to many of the people at Bain,” ex-Bainie Dan Quinn told Fortune magazine in 1996.

Mitt Romney was a co-founder of Bain Capital along with Bill Bain, seen here. Bain was ousted in 1991 and Romney served as CEO of Bain & Company in 1991-1992. In May 1991, while Romney was CEO, Gadiesh was named chairman of the company’s Policy Committee, which set the company’s business strategy and policy. In 1992, under Romney, she became managing director. Orit Gadiesh, who has worked at Bain & Co. since 1977, became chairman of Bain & Co. in 1993.

Orit Gadiesh, born in Israel in 1951, has worked closely with Mitt Romney since at least 1991, and probably much longer since she joined Bain & Company in 1977, when she was 26. Romney appointed Gadiesh to his transition team when he became governor of Massachusetts in November 2002. Gadiesh is the daughter of Falk Gadiesh, an Israeli brigadier general and former member of the general staff who reorganized the Israeli army in the early 1950s after a stint at the Massachusetts Institute of Technology (MIT).

Falk’s daughter Orit was chosen to serve in Israeli military intelligence. Her first position in the Israeli military was as assistant to Ezer Weizman, the deputy chief of staff who later became president of Israel. During the early 1970s, she worked in the war room, a bunker where Gen. Moshe Dayan was in charge. As a war room assistant to Weizman, Orit provided military leaders with documents and correspondence.

Prior to joining Bain & Company, Gadiesh served in the office of the Deputy Chief of Staff of the Israeli Army. Currently, she is on the board of directors of the Peres Center for Peace, an organization headed by a former chief of staff of the Israeli military, Lt. General Amnon Lipkin-Shahak. The high-level Mossadnik Avner Azulay, managing director of the Marc Rich Foundation, is also on the executive board of the Peres Center.

ROMNEY’S INTELLIGENCE CHIEF AND CAMPAIGN ADVISER ­ Mitt Romney named Michael Chertoff, the Israeli agent who supervised the destruction of the crucial evidence of 9/11, co-chair of his counterterrorism and intelligence advisory committee in October 2011. The 9/11 cover-up continues.

Mitt Romney attended the Mossad’s “Herzliya Conference on Israeli Security” in 2007. Romney and the current Israeli prime minister Benjamin Netanyahu worked together as consultants at the Boston Consulting Group early in their careers.