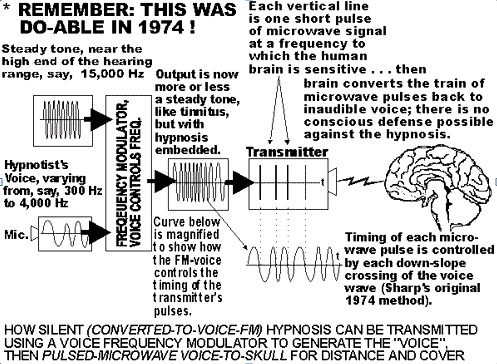 NSA technology is developed and implemented in secret from private corporations, academia and the general public.

The NSA/DoD [Department of Defense] developed proprietary advanced digital equipment which can remotely analyze all objects whether manmade or organic, that have electrical activity.

Tracking individuals in the US is easily and cost-effectively implemented with NSA’s electronic surveillance network. This network (DOMINT) covers the entire US, involves tens of thousands of NSA personnel, and tracks millions of persons simultaneously . Cost-effective implementation of operations is assured by NSA computer technology designed to minimize operations costs. NSA personnel serve in quasi-public positions in their communities and run cover businesses and legitimate businesses that can inform the intelligence community of persons they would want to track.

NSA personnel in the community usually have cover identities such as social workers, lawyers and business owners.

The operations independently run by them can sometimes go beyond the bounds of law. Long-term control and sabotage of tens of thousands of unwitting citizens by NSA operatives is likely to happen.

NSA DOMINT has the ability to assassinate US citizens covertly or run covert psychological control operations to cause subjects to be diagnosed with ill mental health.

The above symptoms highlight a fraction of the vast array of
Neuro-Electromagnetic Frequency Assaults perpetuated by the Police and
Military Intelligence Agencies toward
Remote Mind Control Experiments, Behavioral Manipulation and Murder.

As of the early 1960s, the most advanced computers in the world were at the NSA, Ft Meade. Research breakthroughs with these computers were kept for the NSA.

At the present time the NSA has nanotechnology computers that are 15 years ahead of present computer technology. The NSA obtains blanket coverage of information in the US by using advanced computers that use artificial intelligence to screen all communications, regardless of medium, for key words that should be brought to the attention of NSA agents/cryptologists.

These computers monitor all communications at the transmitting and receiving ends.

This blanket coverage of the US is a result of the NSA’s Signals Intelligence (SIGINT) mission. The NSA’s electronic surveillance network is based on a cellular arrangement of devices that can monitor the entire EMF (electromagnetic frequency) spectrum.

This equipment was developed, implemented and kept secret in the same manner as other electronic warfare programs.

This is an integral part of the Domestic Intelligence network. The NSA’s EMF equipment can tune in RF (remote frequency) emissions from personal computer circuit boards (while filtering out emissions from monitors and power sup- plies).

The RF emission from PC circuit boards contains digital information in the PC. Coded RF waves from the NSA’s equipment can resonate PC circuits and change data in the PCs. Thus the NSA can gain wireless modem-style entry into any computer in the country for surveillance or anti-terrorist electronic warfare.

With special EMF equipment NSA cryptologists can remotely read evoked potentials (from EEGs). These can be decoded into a person’s brain-states and thoughts. The subject is then perfectly monitored from a distance. NSA personnel can dial up any individual in the country on the Signals Intelligence EMF scanning network and the NSA’s computers will then pinpoint and track that person 24 hours a day.

The NSA can pick out and track anyone in the US.

EMF Brain Stimulation has been in development since the MKULTRA program of the early 1950s, which included neurological research into radiation (non-ionizing EMF) and bioelectric research and development.

The resulting secret technology is categorized at the National Security Archives as “Radiation Intelligence“, defined as,

“information from unintentionally emanated electromagnetic waves in the environment, not including radioactivity or nuclear detonation”.

Signals Intelligence implemented and kept this technology secret in the same manner as other electronic warfare programs of the US Government.

The NSA monitors available information about this technology and withholds scientific research from the public. There are also international intelligence agreements to keep this technology secret.

The NSA has proprietary electronic equipment that analyze electrical activity in humans from a distance. NSA computer generated brain mapping can continuously monitor all of the electrical activity in the brain continuously. The NSA records and decode individual brain maps (of hundreds of thousands of persons) for national security purposes. EMF Brain Stimulation is also secretly used by the military for brain-to-computer link (in military fighter aircraft, for example).

For electronic surveillance purposes, electrical activity in the speech center of the brain can be translated into the subject’s verbal thoughts. RNM can send encoded signals to the brain’s auditory cortex, thus allowing audio communications direct to the brain (bypassing the ears). NSA operatives can use this covertly to debilitate subjects by simulating auditory hallucinations characteristic of paranoid schizophrenia.

NSA operatives can use this surreptitiously to put images into a surveillance subject’s brain while they are in REM sleep for brain-programming purposes.

The NSA, Ft Meade has in place a vast two-way wireless RNM system which is used to track subjects and non-invasively monitor audio-visual information in their brains. This is all done with no physical contact with the subject. RNM is the ultimate method of surveillance and domestic intelligence. Speech, 3D sound and subliminal audio can be sent to the auditory cortex of the subject’s brain (bypassing the ears), and images can be sent into the visual cortex. RNM can alter a subject’s perceptions, moods and motor control.

The above is a simple flowchart of Nuero-Electromagnetic Frequency Assaults

The NSA’s Signals Intelligence has the proprietary ability to monitor remotely and non-invasively information in the human brain by digitally decoding the evoked potentials in the 30-50 Hz, 5 milliwatt electromagnetic emissions from the brain.

Neuronal activity in the brain creates a shifting electrical pattern that has a shifting magnetic flux. This magnetic flux puts out a constant 30-50 Hz, 5 milliwatt electromagnetic (EMF) wave.

NSA SIGINT uses EMF-transmitted Brain Stimulation as a communications system to transmit information (as well as nervous system messages) to intelligence agents and also to transmit to the brains of covert operations subjects (on a non-perceptible level).

It is used by a limited number of agents in the US Intelligence Community.

The above is a simple flowchart of Nuero-Electromagnetic Frequency Assaults

showing methods that can be perpetuated by the Police and Military Intelligence Agencies toward
Remote Mind Control Experiments, Behavioral Manipulation and Murder.

5. [NO HEADING IN ORIGINAL DOCUMENT]

That frequency is then modulated in order to impose information in that specific brain area. The frequency to which the various brain areas respond varies from 3 Hz to 50 Hz. Only NSA Signals Intelligence modulates signals in this frequency band. (See Table 1 below)

The Plaintiff learned of RNM by being in two-way RNM contact with the Kinnecome group at the NSA, Ft Meade.

They used RNM 3D sound direct to the brain to harass the Plaintiff from October 1990 to May 1991.

This is the first time ever that a private citizen has been harassed with RNM and has been able to bring a lawsuit against NSA personnel misusing this intelligence operations method.

Remote monitoring/tracking of individuals in any location, inside any building, continuously, anywhere in the country.

A system for inexpensive implementation of these operations allows for thousands of persons in every community to be spied on constantly by the NSA.

This equipment is on a network and is used for domestic intelligence operations, government security and military base security, and in case of bioelectric warfare.

Agents working out of offices can be in constant communication with spotters who are keeping track of the NSA’s thousands of subjects in public. NSA agents in remote offices can instantly identify (using~ RNM) any individual spotted in public who is in contact with surveillance subject.

This is an outgrowth of CIA pharmapsychology (psychopharmacology).

EMF equipment that gathers information from PC circuit boards by deciphering RF emissions, thereby gaining wireless modem-style entry into any personal computer in the country. All equipment hidden, all technology secret, all scientific research unreported (as in electronic warfare research).

Not known to the public at all, yet complete and thorough implementation of this method of domestic intelligence has been in place since the early 1980s.

I tried ringing Mr Akwei to find out what was the out-come, if any, of his court case. He firmly but kindly told me that he could not speak about anything to do with the case over the phone and hung up. A subsequent conversation of similar length resulted in the information that he did not wish his address or phone number published with this article.

So, if we hear of any developments, we’ll let you know.

An example of EMF Brain Stimulation

These publications have only been discovered since December 1991, after Plaintiff had already notified authorities (Dept of Justice, etc.) of Public Corruption by named NSA employees.

When no action was taken against the NSA employees, I researched the Intelligence Community electronic surveillance technology involved and discovered the following publications.