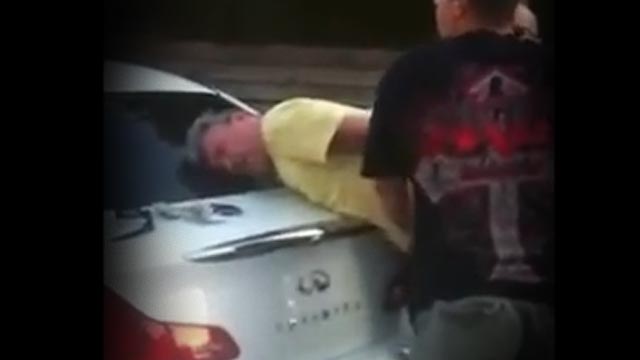 James Stewart, the 65-year-old raw “milk man” and founder of Rawesome Foods, was assaulted near his home today by three armed men driving unmarked luxury vehicles with no license plates. Carrying firearms on their hips and dressed in gangster-style street clothes, Satanic T-shirt imagery and tattoos, they claimed to be making an “arrest” and verbally assaulted James, sprayed pepper spray in his face, then forced his head against a car and screamed, according to witnesses, “You better listen to me or you’re gonna have a bad f*ckin’ day!”

James Stewart’s cell phone was on the entire time, and a phone witness told NaturalNews the arrest was conducted “Nazi style.” Meanwhile, James was screaming to anyone who would listen, “HELP ME! HELP ME! WHY ARE YOU DOING THIS TO ME?”

A partial video of the incident was captured by a witness. The redness in the face of James Stewart is due to the pepper spray assault. That video link is here:
http://www.youtube.com/watch?v=UYTP9C7jtrI

James was wanted on $130,000 in bail by Ventura County, which had originally put him on $1 million bail — an amount usually reserved for murderers, rapists or serial killers. James, accused of selling “unpasteurized milk” through Rawesome Foods, was made the target of an FDA-funded and politically motivated attempt to destroy the raw milk industry in California. He has been charged with financial crimes by Ventura County even though there is literally no legitimate evidence whatsoever linking James to any such crimes, and the entire case is already in the process of being unraveled.

In the Ventura case, there is no crime, no evidence, and not even any justifiable reason to arrest James and put him on bail in the first place! The entire thing was utterly fabricated as a publicity stunt to attempt to intimidate would-be raw milk producers.

In the arrest video, James clearly says, “Sir I was trying to give you the information that I thought Mr. McAfee was giving to me.” James is referring to Mark McAfee of Organic Pastures, California’s largest organic milk producer. NaturalNews has confirmed that Mark McAfee, among several other people, had helped fund James Stewart’s bail bond. According to James Stewart, who phoned from Ventura county jail, Mark McAfee was present at the “arrest” and watched the bounty hunters take James away.

UPDATE: Readers of this story were asking for more details and comments on Mark McAfee. As this story is moving quickly, some of the relevant details haven’t yet been reported. Mark had really gone out on a limb to help bail out James Stewart, even putting up his own house as collateral. When James failed to make a recent court appearance in Ventura — because he had decided to fight the malicious charges against him from outside the system — this put McAfee and other people at financial risk. McAfee, in particular, had mortgaged his house to raise some of this bail money, which I believe came to $100,000 on McAfee’s part. This money would have been forfeited had James not been taken into custody by the bounty hunters.

It’s not yet clear whether McAfee had anything to do with leading the bounty hunters to James. Many people suspect so, and opinion is currently divided over whether this was a reluctant but important act of financial preservation or a betrayal of a key figure in the raw food community. I intend to reach out to McAfee to ask for his accounting of events, if he is willing to go on the record with comments. My history with McAfee has so far been a positive one, and I have known him to be a strong advocate of raw food freedom and someone who clearly went out of his way to help James Stewart make his bail.

During the so-called “arrest,” one of the bounty hunters attempts to verbally intimidate the person filming the video, threatening them by saying, “You’re interfering with an arrest, you’re blocking traffic.” In reality, the bounty hunter never identified himself, never read James any rights and was not involved in any legal arrest whatsoever. The whole thing was a charade carried out by what might appear to a rational person to be armed thugs driving stolen vehicles while impersonating undercover police officers.

In the video, what appears to be a firearm can be seen on the hip of one of the men wearing a pink shirt. At no point during the assault did these men show any badges or identification of any kind. According to California law, “All bounty hunters must carry with them a certification of completion of required courses and training programs.”

According to witnesses, these armed men did not produce any certificates at all. Instead, they verbally intimidated the people filming the incident. One of the bounty hunters called the camera person a “retard” for daring to film him.

Over raw milk? Really? Is this what California has come to now? If you sell unpasteurized milk, you get accosted by three armed men driving unlicensed (stolen?) vehicles, working for the state?

“We are not the police…”

When the witnesses filming the incident asked for the badge numbers of the individuals who claimed to be making an “arrest,” they were told, “We’re not the police so we’re not gonna give you badge numbers.”

Later in the video, a close-up image appears for one of the license plates of the luxury vehicles used by the armed assailants. It is clearly an Infinity car dealership plate number KMA-367. The vehicle is a white Infinity luxury sedan.

The other vehicle, which also has no California license plate, is a black sports car. While James is being stuffed into one of the vehicles, one of the bounty hunters calls him a “scumbag.”

James is currently residing in the Ventura county jail. As NaturalNews previously reported, James was tortured in the Los Angeles jail system for a period of eight days (http://www.naturalnews.com/035208_James_Stewart_torture_county_jail.h…).

James has privately told me, the editor of NaturalNews, that he fears if he is taken back to jail, he will be tortured, subjected to starvation or even murdered by the authorities there. This may be more likely than you think, because the outright criminality of California officials who persecuted James Stewart is now being exposed.

For example, NaturalNews has already exposed Michelle LeCavalier and L.A. district attorney prosecutors for illegally signing search warrants and conducting armed raids on Rawesome Foods even though they had never taken an oath of office as required by California law (http://www.naturalnews.com/036523_Rawesome_District_Attorney_imperson…).

This means the armed raid against Rawesome Foods, the arrest of James Stewart and all the actions taken against him were illegal. Furthermore, James now has a potential multi-million-dollar civil case against Los Angeles County — and possibly individuals in Ventura County — for false arrest, kidnapping and violating his civil rights while they were “impersonating” officials.

Given these circumstances, James has legitimate reason to fear that county authorities there — who almost certainly staged the armed bounty hunter interception of James last night — may quite literally be trying to kill him.

James told me on the phone many times, “I love live, I will not give up. If they say I committed suicide, it means they killed me, Mike. They’re gonna try to kill me.”

That James was stuffed into unmarked, unlicensed cars driven by intimidating-looking men carrying weapons and verbally threatening witnesses at the scene only further supports the legitimacy of James’ fear.

Here, I ask for your support to let the Ventura County DA’s office know we are watching them, and we hold them responsible for the treatment of James.

Call the main DA’s office at 805-654-2500 and let them know that you are joining tens of thousands of other people who are watching this and carefully scrutinizing their behavior. The Ventura County case against James Stewart is, I can assure you, utterly fabricated and completely without merit. It should be immediately dropped and James set free.

Ventura County has been waging a “war of personal vengeance” against Stewart (http://www.naturalnews.com/035197_James_Stewart_Sharon_Palmer_Ventura…). Both Ventura and L.A. counties have spent millions of dollars in taxpayer money in an attempt to incarcerate a raw milk man! A senior citizen! The man is 65 years old, utterly non-violent in every way, and yet has been targeted in the most vicious manner by district attorneys who apparently don’t have any real criminals to go after.

Questions remain about the “arrest” of James Stewart

Some serious questions emerge tonight from the “hunting down” of James Stewart by Ventura county:

• What crime has James allegedly committed that is so serious it justifies $130,000 in bail bonds?

• Where is the evidence of such crimes? (It doesn’t exist!)

• Why are armed individuals who claim to be working for the county running around Ventura with unlicensed vehicles that appear to be stolen off the new car lot of an Infinity dealership?

• Why were these “bounty hunters” dressed in Satanic imagery and sporting gang-style facial hair and tattoos while driving high-dollar luxury cars?

• Why were they so verbally abusive to James Stewart, calling him a “scumbag” if they were just bounty hunters looking to earn a paycheck?

• How were these bounty hunters able to locate James Stewart in the first place? Were they tipped off by someone?

This story is developing here on NaturalNews.com. We will continue to bring you details as we speak with witnesses and investigate more deeply. Share this story. Spread the word: No one who sells real food in California is safe from the “authorities” there. You can and will be targeted, kidnapped, robbed at gunpoint by the police, then tortured in the jail system.