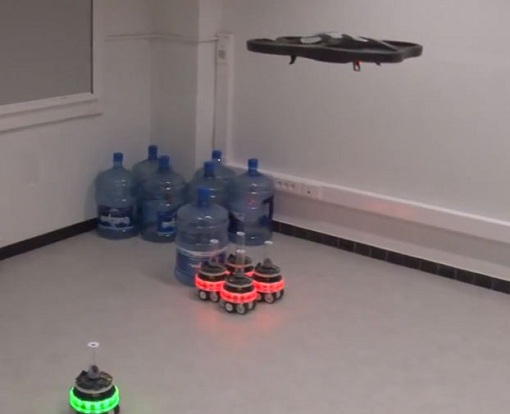 We’re used to thinking of robot swarms as consisting of lots and lots of similar robots working together. What we’re starting to see now, though, are swarms of heterogeneous robots, where you get different robots combining their powers to make each other more efficient and more capable. One of the first projects to really make this work was Swarmanoid, with teams of footbots and handbots and eyebots, and researchers presented a similar idea at IROS earlier this month, using an AR Drone to help a swarm of self-assembling ground robots to climb over a hill.

The focus of this research is communication: getting a flying robot to be able to communicate with a swarm of ground robots by relying exclusively on visual feedback from LEDs. All you need to get this to work are lights, cameras, and some mildly intelligent robots: you can leave your maps, GPS, IMU, hardware IDs, and all that stuff at home. Here’s a video of the system in action:

As interesting as the communication is, it’s the applications that really make this video worth watching. Since the ground robots can’t see very far, they rely on the quadrotor to scout ahead and estimate the parameters of upcoming obstacles. Then, the quadrotor instructs the swarm on the ground how to team up to best overcome those obstacles. With the hill, for example, the quadrotor can use stereo imagery to compute how steep it is, run an onboard simulation to see how many ground robots will have to team up to make it over, and then give instruction and direction to the robots below. Very clever.