Why Did The DHS Just Order 450 Million Rounds Of .40 Caliber Ammunition? 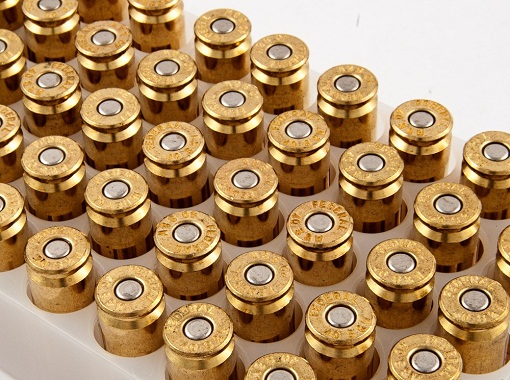 The Department of Homeland security has just executed an order for enough rounds of 40 caliber ammunition to kill every man, woman and child in the United States.

The Intel Hub alerts us to a shocking new defense contract entered by the Department of Homeland Security to secure a massive amount of  ammunition, with the option for infinite supply, infinite delivery.

ATK Awarded Contract to Supply 450 Million Rounds of .40 Caliber Ammunition to the Department of Homeland Security

ATK has secured a major Indefinite Delivery/Indefinite Quantity deal to supply up to 450 million rounds of .40 caliber ammunition to the Department of Homeland Security.

The 1 year contract with four option years comes at a time when many Americans believe that DHS, along with certain aspects of the military, will soon turn their sights on the American people during some sort of martial law scenario.

“We are proud to extend our track record as the prime supplier of .40 caliber duty ammunition for DHS, ICE,” said Ron Johnson, the president of ATK’s Security and Sporting group,” reported a PR Newswire release.

The Department of Homeland Security has been extremely busy in the last few months.

Whether it be mastering their surveillance of social media, planning to buildlevel 4 bio weapons labs in the middle of the country, defending Globalism,lying to Congress about their big brother policies, labeling people who believe in conspiracy theories as potential terrorists, or taking over cyber security, DHS seems to be actively working against the American people on every front.

Considering this, the fact that they are openly ordering millions more rounds of ammunition should at the very least give the American people pause.

As 2012 continues to move forward and the awakening of the sleeping giant that is the American people kicks into high gear, federal agencies seem hell bent to continue to gear up for a possible confrontation with the people of this once great country.

From the ATK press release:

ATK ATK +0.25% announced that it is being awarded an Indefinite Delivery/Indefinite Quantity (IDIQ) agreement from the Department of Homeland Security, U.S. Immigration and Customs Enforcement (DHS, ICE) for .40 caliber ammunition. This contract features a base of 12 months, includes four option years, and will have a maximum volume of 450 million rounds.

ATK was the incumbent and won the contract with its HST bullet, which has proven itself in the field. The special hollow point effectively passes through a variety of barriers and holds its jacket in the toughest conditions. HST is engineered for 100-percent weight retention, limits collateral damage, and avoids over-penetration.

“We are proud to extend our track record as the prime supplier of .40 caliber duty ammunition for DHS, ICE,” said Ron Johnson, President of ATK’s Security and Sporting group. “The HST is a proven design that will continue to serve those who keep our borders safe.”

ATK will produce the ammunition at the Federal Cartridge Company facility in Anoka, Minn. Deliveries are expected to begin in June.

While just a “standard disclosure” the press release goes on to warn this is forward looking contract which may change based on a variety of factors, including economic conditions.

Among those factors are: changes in governmental spending, budgetary policies and product sourcing strategies; the company’s competitive environment; the terms and timing of awards and contracts; economic conditions; the supply, availability and costs of raw materials and components; or reliance on a key supplier.

A newbie I know got a sudden hard-on for 40 cal. “It’s what the cops use,” he said. “It’s not as cheap as 9mm,” I pointed out, knowing that my ballistic buddy was going to be doing a LOT of shooting. “It’s also harder to manage the recoil, so you’ll probably going to be less accurate. And it doesn’t make as big a hole as a .45.” I didn’t get into the .40′s history: the whole post-1986 FBI shooting“we need a bigger caliber so how about we neck-down this 10mm cartridge” deal. I think I convinced him with this: “This isn’t Goldilocks and the Three Bears. There is no ‘just right’ caliber. Big holes (.45) or more filling (9mm); pick one.” Am I wrong?

Source: The Truth About Ammo