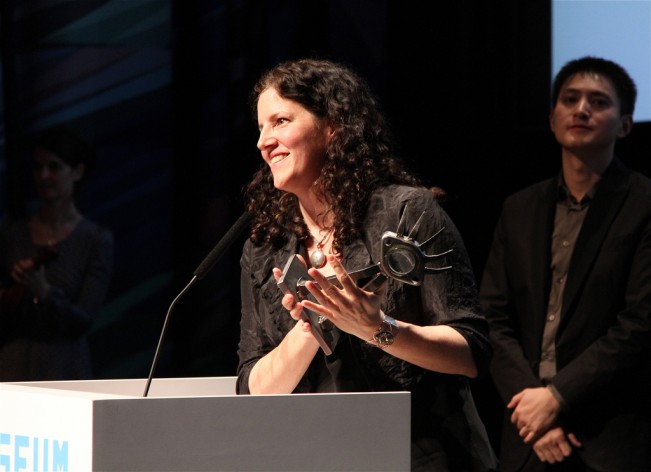 Glenn Greenwald has a horrifying look at the repeated harassment to which filmmaker Laura Poitras, who has made a series of powerful documentaries about the impact of the War on Terror, has been subject when she’s returned home to the United States from trips abroad:

She has had her laptop, camera and cellphone seized, and not returned for weeks, with the contents presumably copied. On several occasions, her reporter’s notebooks were seized and their contents copied, even as she objected that doing so would invade her journalist-source relationship. Her credit cards and receipts have been copied on numerous occasions. In many instances, DHS agents also detain and interrogate her in the foreign airport before her return, on one trip telling her that she would be barred from boarding her flight back home, only to let her board at the last minute. When she arrived at JFK Airport on Thanksgiving weekend of 2010, she was told by one DHS agent — after she asserted her privileges as a journalist to refuse to answer questions about the individuals with whom she met on her trip — that he “finds it very suspicious that you’re not willing to help your country by answering our questions.” They sometimes keep her detained for three to four hours (all while telling her that she will be released more quickly if she answers all their questions and consents to full searches).

Poitras is now forced to take extreme steps — ones that hamper her ability to do her work — to ensure that she can engage in her journalism and produce her films without the U.S. Government intruding into everything she is doing. She now avoids traveling with any electronic devices. She uses alternative methods to deliver the most sensitive parts of her work — raw film and interview notes — to secure locations. She spends substantial time and resources protecting her computers with encryption and password defenses. Especially when she is in the U.S., she avoids talking on the phone about her work, particularly to sources. And she simply will not edit her films at her home out of fear — obviously well-grounded — that government agents will attempt to search and seize the raw footage.

The New York Times did a wonderful interview with Poitras as part of its September 11 coverage last year:

Apparently, it’s threatening to set up a continuum of reactions to the War on Terror that includes both Americans’ emotional reactions to the physical reality of Ground Zero and opponents of the U.S. occupation who are running for office in Iraq. Or perhaps Poitras’s sin is suggesting that things like the wars in Iraq and Afghanistan torture and indefinite detention…”are the things that were not created on 9/11. Those are things that we chose.” Because if we chose them, we can roll them back.

Creating sympathy for people who are harmed by our actions and suggesting we take responsibility for our own are just some of the powerful things that art can do. But confusing ideas that are dangerous to your interests—for example, the suggestion that the huge growth of our security state haven’t reaped us tangible benefits and may in fact have done some damage—and dangerous to the country is a mistake intelligent people out to be ashamed to make. Greenwald points out that DHS concluded that their interrogations of Poitras had produced nothing of value, and yet continued to perform them. Maybe those agencies should answer some questions about what they expect to get next time around, and why harassing Poitras is a valuable use of their time. It’s a far milder query than the ones Poitras is being interrogated for posing.