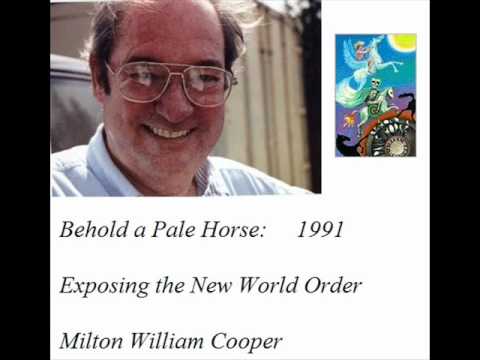 Below is found in Chapter 12 of Milton William Cooper’s 1991 book Behold A Pale Horse:

“The government encouraged the manufacture and importation of firearms for the criminals to use. This is intended to foster a feeling of insecurity, which would lead the American people to voluntarily disarm themselves by passing laws against firearms. Using drugs and hypnosis on mental patients in a process called Orion, the CIA inculcated the desire in these people to open fire on schoolyards and thus inflame the anti-gun lobby. This plan is well under way, and so far is working perfectly. The middle class is begging the government to do away with the 2nd Amendment.”

He served on the Intelligence Briefing Team for the Commander In Chief of the Pacific Fleet. William was the Petty Officer of the Watch and designated KL-47 SPECAT operator in the CINCPACFLT Command Center at Makalapa Hawaii. There he held a Top Secret, Q, SI, security clearance.

William attended Long Beach City College where he picked up an Associate of Science Degree in Photography. He founded the Absolute Image Studio and Gallery of Fine Art Photography in Long Beach, California.

He produced several documentaries covering subjects such as the Kennedy assassination and secret black projects that have built flying disk shaped craft. William is an internationally acclaimed radio personality broadcasting the Hour Of The Time on WBCQ worldwide short-wave 7.415 MHz from 10 PM until 11 PM Eastern Standard Time (0300 to 0400 UTC) Monday through Thursday nights.

William Cooper is the author of Behold A Pale Horse. The book has become the best selling underground book of all time. It is read and promoted by word of mouth by People of all races, religions, and nationalities.

Mr. Cooper is a world class lecturer, one of the few other than superstars, monarchs, and Popes who have appeared at Wembly in London. William Cooper has lectured for 10 years in every State.

William Cooper, Trustee, has founded for Harvest Trust, the CAJI News Service, VERITAS national full size newspaper, The Intelligence Service, Harvest Publications, and has helped over 700 low power FM affiliate stations get equipped and on the air… including the station he managed as Trustee for the Independence Foundation Trust, 101.1 FM Eagar, Arizona, broadcasting to 7,000 people.

Under his leadership Harvest Trust ventured into the publishing trade. The first book under the Harvest Trust imprint was Oklahoma City: Day One by Michele Marie Moore… the definitive classic on the Oklahoma City bombing of the Alfred P. Murrah Federal Building on April 19, 1995.

Shortly after the bombing of the Alfred P. Murrah federal building Rush Limbaugh read a White House memo on the air during his broadcast which named William Cooper, “…the most dangerous radio host in America”. Mr. Cooper considers William Clinton’s pronouncement the greatest compliment that he has ever received.

William Cooper’s FBI file, promulgated by the investigation required by his security clearances while in military service, was one of those unlawfully in possession of the White House in what has become known as, “Filegate”. Shortly after this discovery President Clinton ordered all federal agencies to begin investigation, persecution, and prosecution of Mr. Cooper to shut him up.

After years of filing FOIA requests and researching the IRS William Cooper brought suit against the IRS in Federal District Court in Phoenix Arizona to force the IRS to produce proof of jurisdiction and delegation of authority which the IRS was unable to do. To short circuit Mr. Cooper’s attempt to reveal the true nature of the criminal IRS, and to carry out the orders of the White House, the agency lied to a Grand Jury, not allowing William Cooper to testify, and secured indictments against Mr. Cooper and his wife Annie. This ploy successfully stopped Mr. Cooper from continuing his suit against the criminal IRS for fear of being arrested.

In 1998 copyrights and all rights to all audio and video material produced or ever to be produced by William Cooper was sold to Excel Studios Corporation including the Hour Of The Time broadcast. Excel Studios has contracted to insure this material is always available to the public.

In March of 1999, Cooper William Sent his family out of the United States for their security. He lived and worked alone with his two dogs, one rooster, and one chicken.

Details surrounding his demise were highly suspicious and may never be fully determined.

“…God bless my family. I love my wife & children more than life itself. Everything I do is for the future of all my children. They may not understand why I have sacrificed so much, why I am so dedicated to this work; but someday they will. I want them to know they are the most important People in my life, and how very, very much I love them…” – William Cooper