Top Army Officer Accused of Sex Crimes: ‘I’m a General, I’ll do whatever the f**k I want’ 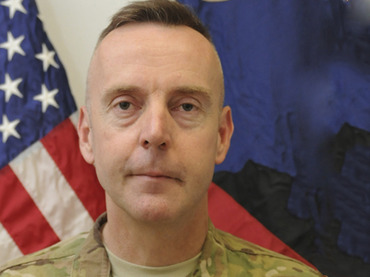 After months of keeping the details of a case against a US soldier under wraps, Army prosecutors on Monday presented evidence against Brig. Gen. Jeffrey A. Sinclair, a 50-year-old serviceman being charged with a slew of sex crimes against five women.

From Fort Bragg, North Carolina on Monday, prosecutors for the US Army began presenting evidence in the Article 32 hearing that will determine if Sinclair, a 30-year-plus veteran of the military, will have to be court-martialed over allegations of sexual assaults and other crimes committed while representing the United States.

Sinclair had been under Army investigation for several months, but was not formally indicted until late September. Now for the first time since the Pentagon went public with the case, evidence being used to prosecute the one-star general is being presented to the media.

According to the Fayetteville Observer, Monday’s hearing detailed sexual misconduct against four female Army subordinates — two female captains, a major and a lieutenant — and a civilian. Sinclair is being accused of violating military code at Fort Bragg, as well as bases in Germany, Iraq and Afghanistan, where the encounters were described graphically to the court as occurring “in a parking lot, in his office in Afghanistan with the door open, on an exposed balcony at a hotel and on a plane, where he allegedly groped a woman.”

Prosecutors say that Sinclair had women send him sexually explicit photos and videos, and allegedly made “frequent derogatory comments towards women,” the Observer reporters.

“When confronted about those comments,” the paper notes, “Sinclair is accused of replying, ‘I’m a general, I’ll do whatever the (expletive) I want.’”

Pending the outcome of this week’s hearing, Sinclair could be court martialed on charges that include forcible sodomy, wrongful sexual conduct, violating orders, engaging in inappropriate relationships, misusing a government travel charge card, and possessing pornography and alcohol while deployed.

Lt. Col. Jackie Thompson, a military attorney representing Sinclair in the case, says that the defendant had his rights violated by Army investigators that accessed and viewed personal emails sent from the soldier to his wife regarding the charges. According to the Observer, prosecutors accessed more than 16,000 emails from both military and personal accounts that belonged to Sinclair, which attorneys say were protected under attorney-client confidentiality privileges. On Monday, Thompson asked for the court to appoint a new prosecutorial team to charge Sinclair.

Eugene R. Fidell of Yale Law School tells the AP he expects the case with reduction in rank and forced retirement for Sinclair, adding, “It’s a rare thing for an officer to go to jail” because sanctions against more high-ranking officials “tend to be more in the nature of political sanctions, in other words getting rid of people rather than sending them to the brig.”

Previously, the Associated Press filed a Freedom of Information Act request to obtain the charging documents regarding any evidence against Sinclair. Lt. Col. Nelson Van Eck, Jr., the acting chief of the U.S. Army’s Criminal Law Division, refused their request by writing, “Release of these documents could reasonably be expected to interfere with law enforcement proceedings, would deprive Brig. Gen. Sinclair of a fair trial or impartial adjudication and could also reasonably be expected to constitute an unwarranted invasion of personal privacy.”