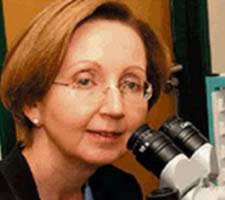 Mystery: Doctors are still at a loss to explain Dr Anne Szarewski’s death in her Hampstead home in August. Doctors are still at a loss to explain what exactly caused the brilliant researchers death. She was found with high levels of an anti-malarial drug in her bloodstream, but doctors said this was not thought to have caused her death. The scientist who pioneered the cervical cancer vaccine was found dead by her husband at their $2 million home after he warned she was “heading for a crisis” by working too hard. Dr Anne Szarewski, 53, a university lecturer whose discovery has saved thousands of lives, was begged to slow down by her husband, who was becoming increasingly concerned about the pressure she was putting on herself. In August he found her dead in their four-bedroom home in West Hampstead, north London, after he spent two hours drilling through a door she had locked from the inside. Dr. Szarewski is credited with discovering the link between the human papillomavirus and cervical cancer, leading to a vaccine for HPV, the first-ever vaccine against any form of cancer, which is now routinely given to girls across the country.