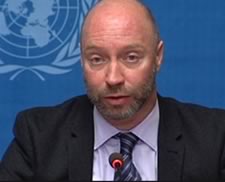 Glenn Thomas, AIDS and Ebola expert and spokesperson for the World Health Organization. Ebola expert Glenn Thomas was among the 298 people who were killed when Malaysia Airlines flight MH17 was shot down and crashed in Ukraine. It is understood he was one of more than 100 researchers who were aboard the flight on their way to an international Aids conference in Australia. Among the other delegates aboard the plane was Joep Lange, a leading AIDS researcher and former president of the International AIDS Society (IAS).